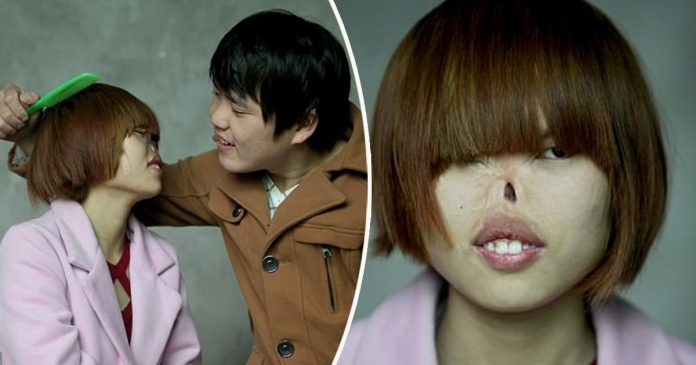 As the old adage goes, “love is blind” and this couple from China is the living example of how this is true. 23-year-old Lin Zhouqiang had recently married the love of his life who is 21-year-old Xu Qinqin. Their union was widely covered by the Chinese media and it melted the hearts of many.

He fell in love with Qinqin’s kind heart and it did not matter to him what she looked like. He did not care about her physical deformity because it was of no consequence to him. Qinqin was made fun of and scorned by everyone she knew including her neighbors, colleagues and even her own family members. 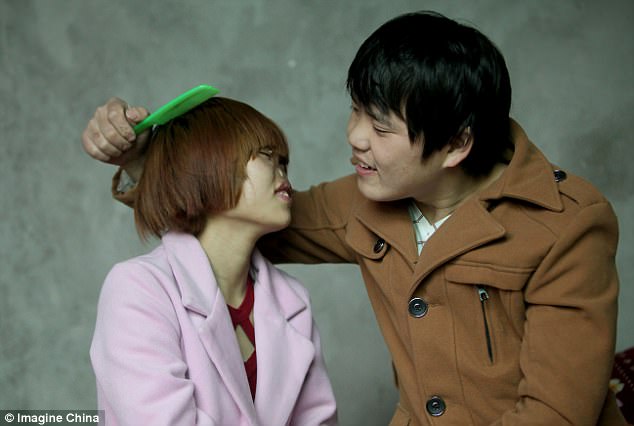 Everyone she met before meeting Zhouqiang had ridiculed her because of the way she looked. Her face has a gaping hole where her nose should be and it was a result of a freak accident when she was a child and it was no fault of her own.

According to the Chongqing Morning Post, the couple lived happily together in the Yuechi County, south-west China’s Sichuan Province. The news of the couple’s marriage had been the topic of discussion in the village of Zhengjiaba. Reports relayed that some villagers are actually afraid of the way Qinqin looks while others praised the couple for finding true love.

When Qinqin was only an infant of 29 days old, she was left unattended in a room of her house one day. A rat crawled towards her and bit off her nose and the flesh around her eyes. Her mother recalled the incident saying she had to leave her children at home in order to go out to the farm and complete her work.

The mother-of-five put her baby girl in a basket and left her in the family bedroom. She then left all five of her children and went to the farm. Two hours later, she was confronted by her eldest daughter who rushed to her with horrifying news. 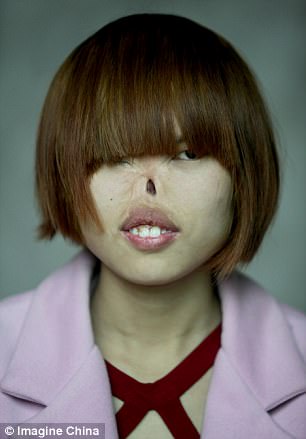 She told her mother that Qinqin’s nose had been bitten off by a rat. Guangzhen dropped what she was doing and ran home as fast as she could. She was greeted by a screaming Qinqin with blood on her face.

They rushed her to the hospital and was thankful she survived. However, doctors could not help her face and she remained physically disfigured.

Growing up was difficult for her as she was the target of jokes and bullies. The bullying got so bad that she had no choice but to quit school during her sixth-grade because she could not take it any longer. After failing to find work in her village, Qinqin decided to leave for the bustling city of Guangzhou when she turned 17. 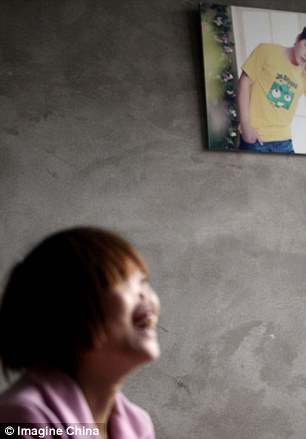 She was recruited to join a company which manufactures clothing. Unfortunately her colleagues constantly made fun of her and this echoed her time in school. She had to leave the job a year later because she could not stand being bullied.

She was then introduced to a man who was eight years older than her by her family members. They got married when she turned eighteen but the marriage did not last. They divorced two years later. She told reporters “Every time when we argued, my husband and his family would say I was a freak and ask me to go back home.” 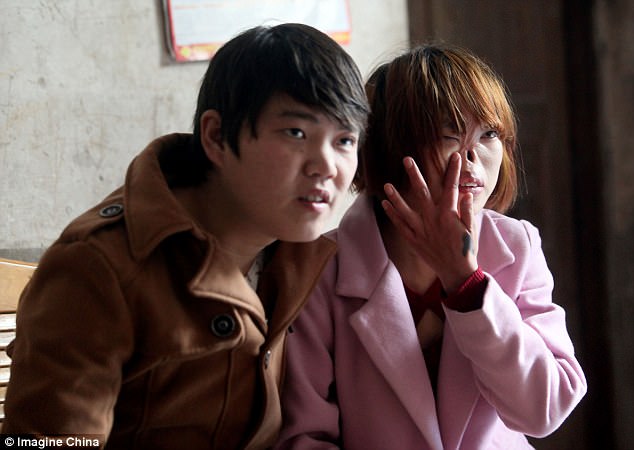 After having nothing but heartaches from her social interactions, she decided to isolate herself. She became a hermit and did not dare to venture out of her home. During this time, the internet became her only source of social interactions and her connection to the outside world. 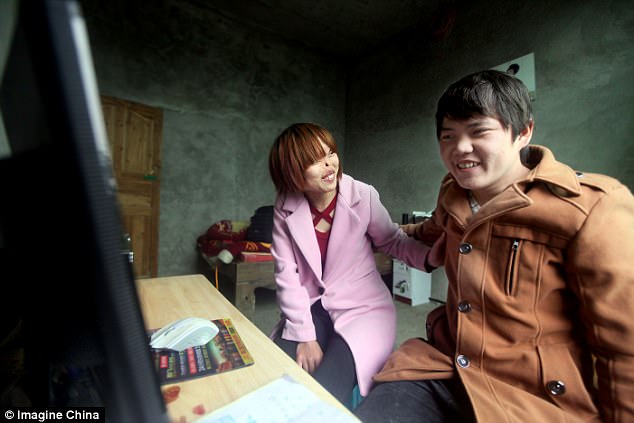 She used the Chinese messaging platform called QQ and that was where she met her husband-to-be. She developed her confidence through the use of the internet and the pair became close. They messaged each other regularly and found out that coincidentally Zhouqiang came from the same village as her. 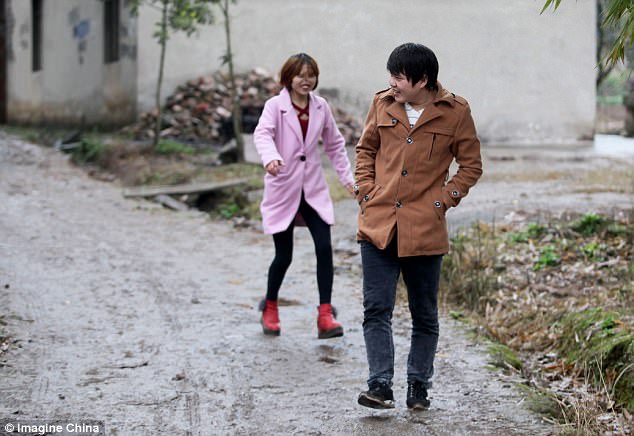 She revealed that she did not have a nose but that did not discourage him. He knew this girl was an optimistic and kind-hearted person despite all the hardships she had endured in her life. Zhouqiang said “It might be fate. Since I knew her experience, I have felt that the girl had lived a tough life. I decided to marry her after knowing her for about a month.” 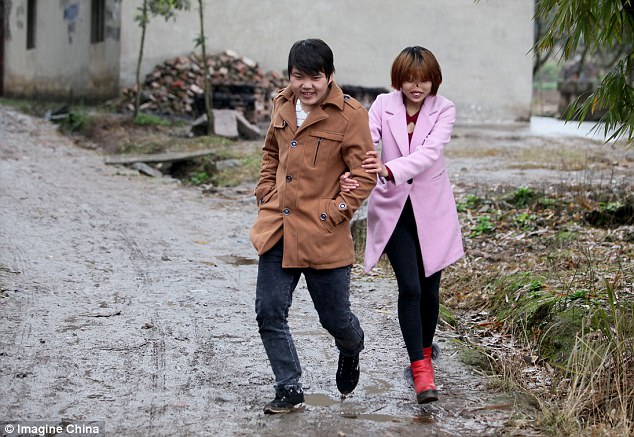 They met face-to-face not long after the revelation. He knew that he loved this girl deeply, so much so that he wanted to marry her. He proposed and she enthusiastically said yes! Their relationship is one born out of true love. 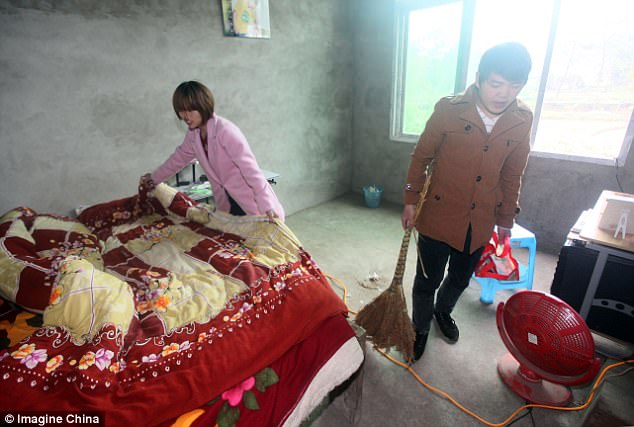 They are happy together despite criticisms over their relationship. They simply ignore the negative comments and jeers. They instead choose to focus on the bright side.

Love this story? Share it with your loved ones.