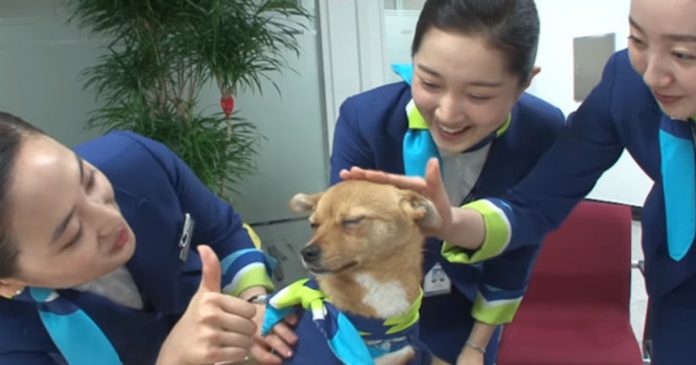 Meet Dony, the dog who is living the high life surrounded and pampered by beautiful flight attendants!

In a hilarious short documentary by SBS TV, Dony, the mascot of Air Busan office, can be seen being totally firm with his preference, he only wants to be surrounded by female flight attendants.

“After a flight is really tired, but once Dony welcomes me, all the fatigue is gone. He is really our mascot!” said one of the air stewardess to SBS TV.

Even when a male flight attendant approaches him in a friendly manner, Dony reacts coldly towards him.

However, the opposite happens when he meets female flight attendants.

Dony who gives a cold and unfriendly reaction to the male flight attendant earlier behaves like a puppy in the arms of beautiful ladies.

Nevertheless, behind his glamorous and pampered life, Dony has a tragic story. He was found wandering alone in the parking lot, completely lost and abandoned.

Luckily, one kind-hearted female flight attendant saw him and she brought him to the office where it was warm and safe

Ever since that day, Dony only follows her and other female flight attendants. He is always ready to greet them when they have finished their flight duty.

Thanks to his regular presence at their office, the lucky dog even gets his own uniform!

Mother dog and puppy in a heartfelt reunion after puppy recovered...