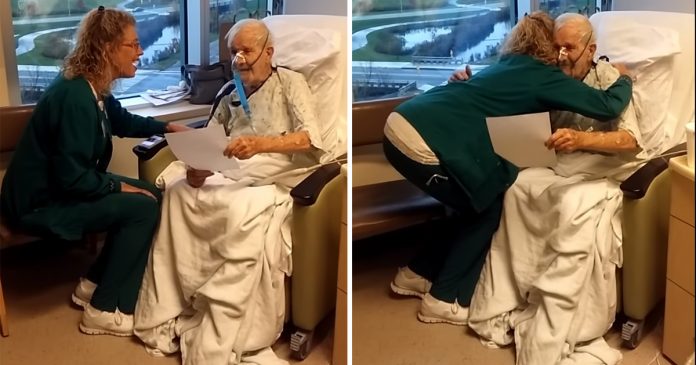 A singing nurse who serenaded an elderly father back to good health has touched the hearts of thousands across the globe with her sweet voice.

When Roberta Lytle admitted her father Robert Olson to hospital for his ongoing heart condition and breathing difficulties, little did she know he would make a miraculous recovery just one week later.

One day, nurse Brenda Buurstra, who took care of Robert during his stay in Bronson hospital, stunned his daughter with her hidden singing talent.

While watching a TV program about singer Pat Boon, Robert told Brenda how much he adores a song by his daughter Debby Boone, called “You Light Up My Life”.

The nurse quickly printed off the lyrics and began to sing a moving rendition of the tune to her patient, while Roberta filmed the kind gesture in awe.

In the heartwarming footage, Brenda places her arm on Robert’s, looks into his eyes and her angelic voice instantly brings a massive smile to Robert’s face—soon he can’t help but join in!

Moments later, the sweet pair can be seen sharing the lyric sheet, and they begin singing together.

Her sweet gesture clearly brought a special light into Robert’s life as just one week later, he was discharged from hospital and made his way home. Good job Brenda!

“If you listen to the video you can hear him trying to sing at the very end. But it changed him, it was like, like he knew he was going to go home,” Roberta said.

“Omg this whole video lit up my life, God bless both of them. This nurse is an angel and she is the exact type of person that should be taking care of people, especially the elderly.”

Another wrote, “Can’t stop crying that is wonderful. I’m so pleased he managed to get home too. The nurses there are amazing. Bless them all.”

Wuhan virus speculated to have originated from bat or other wildlife, experts warn public to stop eating wildlife