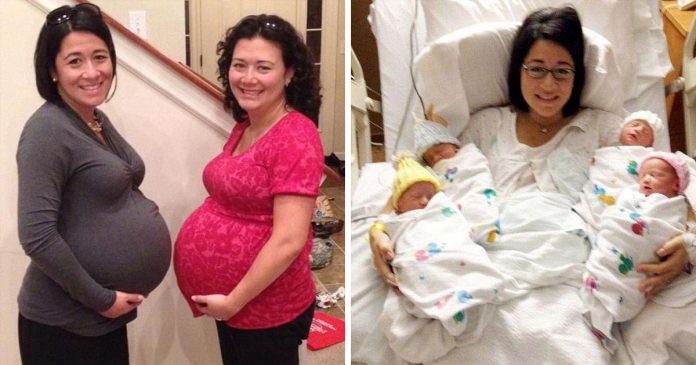 Couple Annie and Joby Johnston had been trying to have a baby for five years but to no avail. Throughout the years, they tried everything from surgeries, in-vitro fertilization, and artificial insemination.

Tired of trying, the couple felt hopeless until Annie’s older sister, Chrissy Knott offered to become the surrogate mother for the couple.

Chrissy who was Annie’s only sibling is a 37-year-old married mother of two children. She first told the couple that she would help carry the baby in 2011 after the couple’s first few in-vitro fertilization failed.

However, it was only two years later that Annie and Joby took up Chrissy’s offer on February 19, 2013.

Later, a doctor implanted two embryos in both Annie and Chrissy. They were fully aware of the possibility of having four babies if all the embryos survived but the Johnstons were already tired of going through another failed attempt.

“The doctor made sure that everyone was OK with the possibility of four babies because it was possible,” Johnston told ABC News.

“But, for us, after trying for so long, we were just trying to increase our chances of getting at least one.”

Surprisingly, the sisters learned that each of them was carrying twins during their seven-week ultrasound.

“I was relieved, more than anything, that the babies were developing,” Annie said.

On October 24, each sister gave birth to twins through scheduled C-sections so that the babies would share the same birthday.

“My sister was carrying the two boys, and she delivered first, so I could be there in the room for her when she had them,” Annie said.

Thankfully, the babies were all born healthy.

The twin boys were named Charles and Thomas while the twin girls were named Grace and Hadley.

Annie was very grateful for the miracles that she prayed for years to come true. After years of waiting and trying, she and her husband now have 4 children! But Annie felt most grateful for her sister Chrissy’s sacrifice.

“We’re very thankful for what she did for us,” Annie said of her sister.