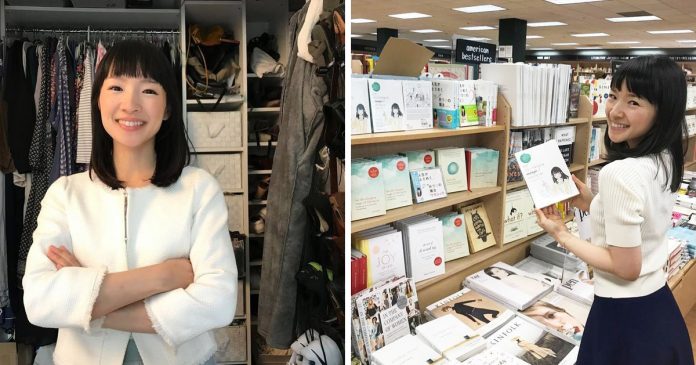 With the spirit of New Year, New You, Netflix has introduced us to another amazing series “Tidying Up with Marie Kondo” with the most famous professional organizer and tidying expert, Marie Kondo—and the responses are overwhelming.

Enchanted with organizing ever since her childhood, Kondo started her tidying consultant business at the age of 19—when she was still a student in Tokyo, Japan.

She became famous when her book “The Life-Changing Magic of Tidying Up” became one of the New York Times best-selling book.

Tidying Up with Marie Kondo available in Netflix now.

Kondo in behind the scene of her Netflix show. She is always smiling.

Her book sweeps across the world as it was published in 41 regions and countries and sold over 5 million copies worldwide. Kondo has also been listed as one of the Time Magazine’s 100 most influential people.

Kondo has now been featured on more than fifty major Japanese television and radio programs as well as in Time Magazine, The New York Times, The Wall Street Journal, The London Times, Vogue Magazine, the Ellen Show, the Rachael Ray Show and more.

Kondo with her best-selling book.

Her best-selling book took tidying up to a whole new level and teaches how to simplify and organize our homes with one simple question—does it spark joy? Kondo’s new Netflix series shows how this cute 34-year-old help people tackle their clutter and help bring more joy to their life.

With her Netflix show premiered on January 1st, people have been showing so much support and positive feedback. Their reaction online will definitely spark the joy in you!

The only way to start your new year—according to Netflix.

Literally everyone after watching Tidying Up With Marie Kondo.

Literally everyone: watches Marie Kondo on @netflix once pic.twitter.com/5aZq0h0aXI

Me a week after learning about Marie Kondo pic.twitter.com/61mociW6GH

The internet has also joked about how Kondo’s house would look like.

This account will now exclusively post pictures of Marie Kondo pointing quizzically at piles of shit in people’s houses pic.twitter.com/TNFve2XzgO

One important lesson from Marie Kondo.

I've watched the first episode of the Marie Kondo show — the one where the guy angrily demands that his part-time working wife, who raises their two toddlers alone, do more laundry — and clearly, KonMari doesn't work, because by the end of the episode he's still there

Makes a lot of sense.

Me every single time:

Me watching “Tidying up with Marie Kondo” on Netflix while ignoring my closet #TUWMK pic.twitter.com/HBVQzjXuj2

i know i'll like "tidying up with marie kondo" a minute in because one category encompasses like five rooms of the house and another is just "books" pic.twitter.com/AI5PaUB7Zl

When you realized it:

Marie Kondo after u burn all your possessions pic.twitter.com/rUxGmbxhNE

Tidying Up With Marie Kondo (2019) pic.twitter.com/HyWdV7Hxj2

Watch the official trailer of Tidying Up with Marie Kondo here: