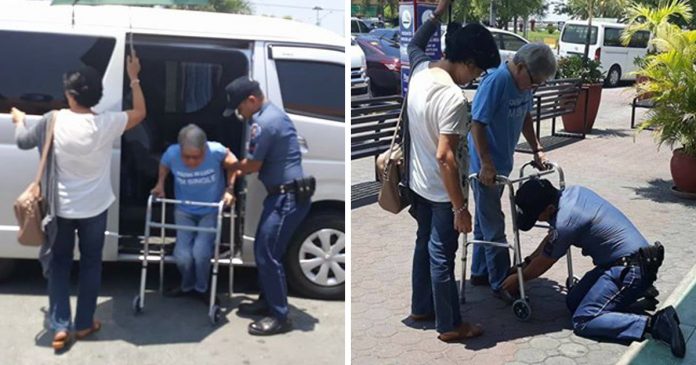 One kind-hearted Filipino police officer shows that a small act of kindness goes a long way when a photo of him helping tie a senior citizen’s shoelace became viral.

The police officer who is identified as PO1 Jerald Lagazon quickly lent a helping hand to assist an elderly couple to get out of a van.

The elderly couple took a van to go to NLEX Mega Station and when they arrived at the destination, the couple faced a little bit of difficulty to disembark from the van.

A woman came out of the van first and while waiting for her partner to get out of the van she quickly shielded from the direct sunlight with an umbrella.

However, the man later had trouble as he struggled to get out with his walking aid.

The woman later went around to ask for help.

Luckily, Mr. Lagazon was around and he immediately went over to the van as soon as he saw the elderly man struggling to get out of the van.

After he helped the man to get out of the van, Mr. Lagazon noticed that his shoelaces came undone to which he did not hesitate to kneel before the man and help him tie the shoelace.

PNP Good Deeds is the Facebook page that highlights some of the contributions and good work done by the Philippines’ National Police.

It did not take long for the post to go viral on social media as thousands of people praised Mr. Lagazo for his kind and quick act.

We often forget how much of an impact that a small act of kindness can have and in this case, Mr. Lagazo’s kindness not only impact the elderly couple but also inspire others to do the same!

Selling food on streets to help her mother earn money at...