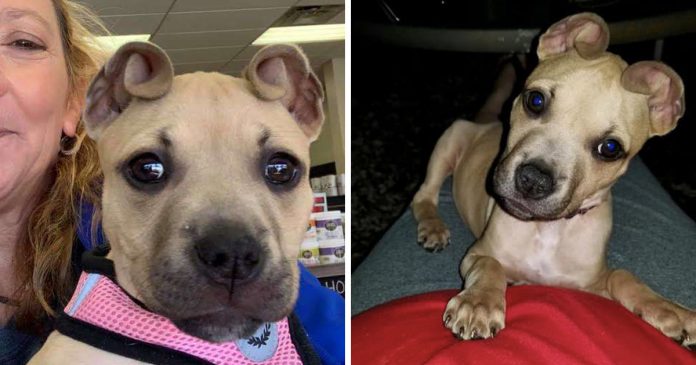 This adorable rescue pup has the most amazing Cinnamon roll ears, and we’re completely obsessed with her.

And she’s just found herself a new home thanks to the rescue group, Pit Sisters.

Jen Deane, president of the group, knew she wanted to rescue abandoned puppies, but she never expected to find Cinammon with her cute curled up ears.

From the litter of tan-colored puppies Jen saw, Cinnamon immediately caught her attention.

“I’ve never seen a dog with ears like hers. Everyone can’t believe how adorable she is … and she’s even cuter in person!”Jen told The Dodo.

And since pictures of Cinnamon’s sweet face have circulated on social media, the internet is officially in love with her too.

Some have commented that the adorable pooch’s unique ears look like a popular 1940s pin up hairstyle called “victory rolls”.

Cinnamon is so happy to be cared for by Jen, because just three weeks earlier, she and her siblings were underweight and infected with worms.

Jen thinks they were abandoned by a neglectful owner.

“They were only 5 weeks old but had not been well cared for at all.

“We got them right to our vet where they could get immediate health care, and they’re all doing a lot better now,” she explained.

The adorable pups, except two, will be up for adoption in a couple of weeks.

And Cinnamon has already found her loving forever home—a sweet family who already has three dogs. She’ll never be lonely!

“Cinnamon is very feisty, in a good way. She’s really sweet and gets along well with other dogs. Her ears just match her personality — quirky and really fun,” Jen said.