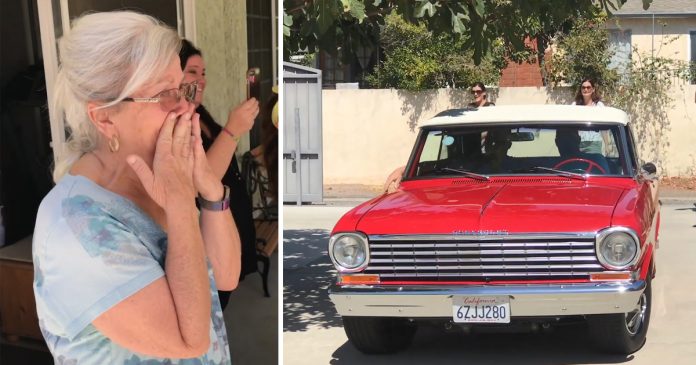 Chevrolet Nova has always been Jeanie Pinto’s dream car ever since she rode one as a child back in 1964. Little did she know that she would get to own her dream car 54 years later.

What made the long wait even worth it was that it was given as a present from her son and husband, Donny and TonyPinto.

Being the dedicated son and devoted husband, they purchased a second-hand Chevrolet Nova that was barely useable for $6500. It also cost them another $1500 to ship the car from South Carolina to San Diego.

“We admit we overpaid and only used the body, fenders, windshield and the door – everything, and I mean everything, else was garbage,” Donny told Daily Mail.

“But we were ambitious and decided to do it,” he said.

Determined to turn the car into the greatest present that a son could give to his mother, Donny (right) later repaired the car from near-scratch with the help of his good friend, Gregg (left).

However, restoring the car was not an easy feat. Apart from the expensive repair cost which cost them $30,000, the whole process took them six years which meant keeping the secret project from Jeanine’s knowledge.

“The car was in San Diego where I live and my parents live in LA so we had to move it each time she came to visit. We would hide it anywhere we could – neighbors, friends, rental trailers. Wherever we could find to stash it for a weekend until she left,” Donny said.

“She would politely reply, ‘we don’t have a Nova’. So thankfully she never twigged and it was secret right up until the surprise.”

Finally, after years of restoring the car and keeping it as a secret, it was time for the big reveal. On November 6, 2018, Donny sent several text messages to his mother, asking her to come outside and claim her dream car.

Jeanie who despite being skeptical about her son’s texts, went out and it was not until she saw the glimpse of the red Chevrolet Nova Convertible that she realized her son was not trying to pull a prank on her.

Speechless, Jeanie burst into tears as she embraced her son. “Are you kidding me?” she said to Donny.

Jeanie later shared her vivid memories when she first rode the car back in 1964 that she enjoyed so much. Although she received the sad news of her father passing after the ride, it remained as her dream car until her son made it come true.

Watch how Donny surprised his mother with her dream car in this sweet surprise video here.

Mom cradles ‘dying’ newborn in her arms—but then, a medical miracle...