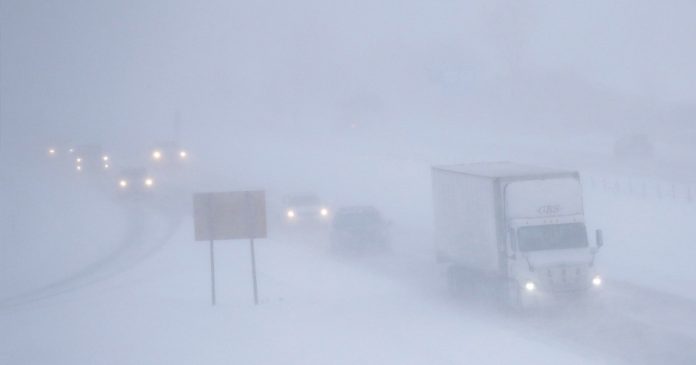 Subzero temperatures and heavy snow are set to strike the U.S. Midwest and Northeast this week as close to 75% of the U.S. population will have to endure life-threatening cold weather the nation has not seen in the past 25 years.

The extremely cold weather is expected to cause blizzard-like conditions in many parts of the Midwest along with heavy snow with up to a foot in Wisconsin and Minnesota.

The National Service Weather’s forecasters are calling the dangerously cold weather as “possibly life-threatening” with Wednesday is expected to be the worst.

Not only is brutal cold invading the central parts of the country, Accumulating snow and freezing roadways all the way into the deep south could make travel dangerous through tomorrow morning. Check the forecast and travel conditions before you head on on your morning commute! pic.twitter.com/8jRAUCvIA3

Forecasters expected the temperatures will continue to plunge to 20-40 degrees below zero in the Upper Midwest and Great Lakes between Tuesday and Thursday.

Low-temperature forecast in Milwaukee is set to plunge to negative 28 degrees with wind chills as low as negative 50.

The last lowest temperature was recorded in the city is negative 32 degrees in 1996.

It is estimated around 220 million will get affected by the biting cold weather. The frigidly low temperature has led to schools in Minnesota closing down.

Hundreds of school were also closed across Michigan, Wisconsin and in some districts in Milwaukee, eastern Iowa, Minneapolis, and St. Paul.

According to Flightaware.com, the winter blizzard has also led to around 3,480 U.S. flights being canceled on Monday, Tuesday, and Wednesday.

Heavy snowfall with up to a foot or more is expected to occur in Dakotas, Minneapolis and St. Paul, Minnesota and in Central Michigan.

Meanwhile, upstate New York, Vermont, and New Hampshire will expect less than a foot of snow, and Boston will see less than an inch of snow.

Kuma is not a fan of how much snow we have gotten so far#wisconsinweather #wisconsin #Snow pic.twitter.com/n7FsAaA7IH

The National Weather Service has warned the public that the snow blizzard could be deadly as it is “dangerous to impossible travel conditions.”

Strong Arctic high pressure will bring below normal temperatures over the central and eastern U.S. through the weekend. pic.twitter.com/oPiumMX8Xa

The heavy snow will also be expected to extend to Mississippi and Alabama.

The extreme weather which is expected to be the coldest in the past quarter of the century is expected to put millions of lives in risk of hypothermia and frostbite within minutes, meteorologists warned.

According to CNN, the biting cold already has caused at least one death in Minnesota and another in Illinois.

One in a million: Woman finds tiny pearl in her paella,...