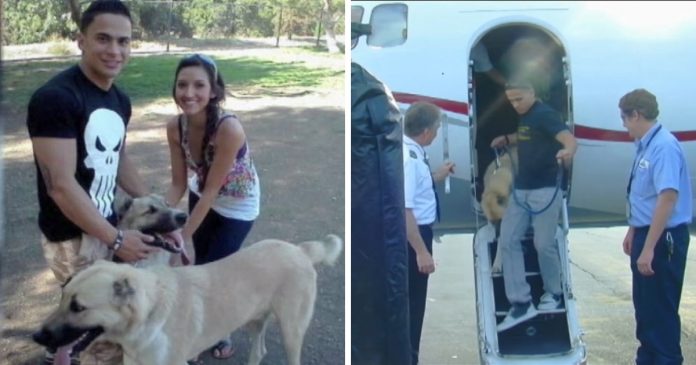 Andrew Morales who works as a Staff Sergeant in the U.S. Marine Cops thought that he had to separate from his two dogs forever when he had to move to a new military base as they were too big to fly.

Luckily, an heiress stepped in and sent a private jet to help him.

Morales first rescued the two dogs when he served in Afghanistan in 2011 and brought the two canines, Dusty and Wyatt to California.

Two years later in 2013, Morales received news that he had to be transferred to Camp Lejeune.

He had no problem with the transfer until he found out that his two dogs were too big to fly on a commercial flight.

Later, Morales contacted the rescue league who helped him fly his dogs from Afghanistan to Calfornia for help and they later shared about his situation on Facebook.

Morales was indeed hoping for help but he never expected that the help would come in the form of a private jet.

Apparently, the heiress of Wrigley Gum, Helen Rosburg found out about the post and she quickly sent the help Morales needed.

Since helping a Marine move his family, including his rescued dogs, across country, I have received many wonderful…

So, instead of boarding a commercial flight, Morales, his family, and his two dogs got to fly in style in a private jet!

“He was going to lose his dogs and I said ‘Not on my watch,’” Rosburg told ABC News in an interview.

“He’s a hero on so many different levels. The Wrigleys are an extremely patriotic family and I am a true Wrigley child,” she added.

Clearly, Morales was thankful for the generous offer Rosburg gave to him. “From the bottom of me and my wife’s hearts we really appreciate what she did for us,” Morales said.

ABOUT US
GoodTimes provides you interesting daily feeds of videos, stories and news.
Contact us: go[email protected]
FOLLOW US
© Copyright by GoodTimes
MORE STORIES