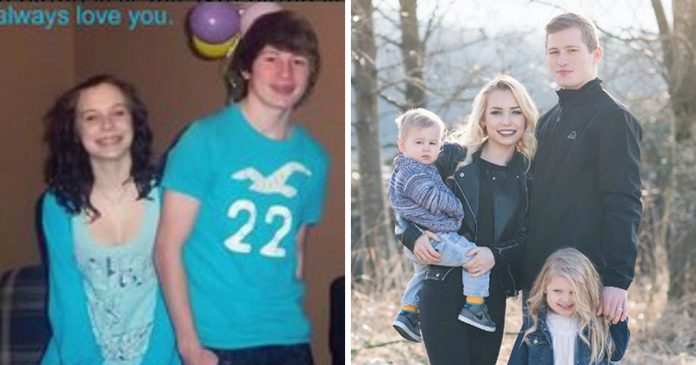 When she was 18 years old, Caitlin Fladager found herself pregnant by her high school sweetheart, Noah Slomski. She was excited by the pregnancy and just could not wait to become a mother.

However, not everyone felt the same for her.

Caitlin who is now 23 years old and happily married to husband Noah with two children said that she could not be happier when she was pregnant with their first child.

Even though she was only 18 at the time, she felt that she was ready to enter motherhood.

On her Instagram post, she recalled the times when she received backlashes over her decision to become a mother at 18.

“When I got pregnant at 18 with my daughter, I got told I was too young, that I should’ve waited until I was old enough to legally drink,” she wrote.

“Then with my son, I got pregnant at 20, even though I could drink, I still got told I was too young.”

Caitlin even shared when she was told that she should be married before having children. She initially thought that the criticism would die down after she was married to Noah.

“When I had my daughter and wasn’t married, I got told she was a bastard child and you should be married before having children.”

Not only that, but adults around her also claimed that Noah would abandon her.

“I have everyone telling me he would leave as soon as she was born, that everything would change for the worse, that I should be ready to do it on my own.”

However, 5 years later, Noah proves that he is not like most teen fathers who failed to step up.

In fact, he has been very active in raising their children right from the moment Arianna, their firstborn was borned.

My husband was only 17 when I got pregnant with our daughter & I was told to expect him to leave. 4 years ago, when I asked him how he would be different than any other teen dad, he said “I guess you’ll have to wait and see so I can show you” He definitely did. ❤️ then vs now pic.twitter.com/V6OQhSYbSh

To Caitlin, she learned that there was no benefit if she did anything just to please the people around her.

“In the end, people will judge no matter what you do. So you better make decisions that work for you and your family. Because in the end, it only matters if you’re happy!”

My 17th birthday vs my 23rd birthday ❤️ pic.twitter.com/fOSOSWKwsV