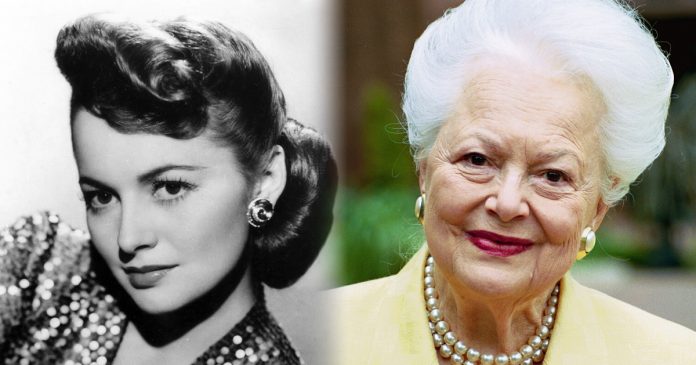 Gone with the Wind star, Olivia de Havilland is now 102 years old and is more stunning than ever!

Retired actress Dame Olivia is the last surviving member of the 1939 award-winning hit film, and is proving to us all that age is just a number with her gorgeous looks.

The Hollywood movie tells the story of southern Americans living during the 1861 civil war, and Olivia plays the lady named Melanie Wilkes.

Olivia was nominated for an Academy Award for her amazing part in the film, but she admitted in an interview that she didn’t immediately identify with the character when reading the book!

“But when I read Sidney Howard’s wonderful script, Melanie seemed like a totally different character. I liked her, I admired her, I loved her!” she said in an interview with Vanity Fair.

She has also bagged two Oscars in her lifetime though—the first for her part in To Each His Own (1946), winning Best Actress, and another in 1950 for Best Actress again for her role in The Heiress.

As if that’s not impressive enough, just before she turned 101 in July 2017, she was made Dame.

She is the oldest person ever to receive the honor, and has said that she’s super proud of the achievement.

How does Olivia stay looking so fresh-faced and youthful at her age? She told Vanity Fair it’s “the three L’s – love, laughter and light.”