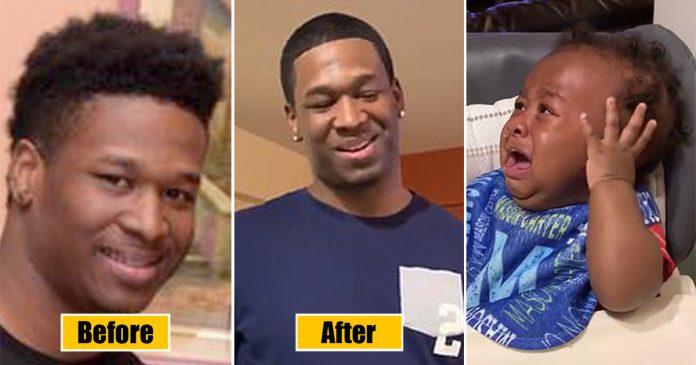 Have you ever feel so frustrated that you want to cry your heart out so bad? Well, this baby can definitely relate to that when a video capturing the moment he sees his father with a new trim has gone viral.

In the hilarious 16 seconds video, the 8-month-old Mason Carter Harris was seen sitting in his baby chair when his father Greg Harris Jr entered the room from behind him in New York.

Greg entered the room to show off his new hairdo.

As his father greeted him, Mason looked at Greg and realized that his father’s long hair is no longer there—instantly breaks into tears that very moment. He can be seen cradling his own head while sobbing uncontrollably. The hilarious clip of Mason’s reaction to his father’s new cut has garnered over 132,000 views.

Greg had his hair styled in a mohawk fro previously.

Mason stared at his father for quite a while.

Before crying his heart out.

Greg new trim haircut must’ve shocked his son. In the video recorded by his mother, Melissa Harris, Mason was seen turning his head to look at Greg and stared at him for a few seconds before he broke into tears.

And he seems to be still in disbelief.

And continue to cry and sob hysterically.

While crying, Mason turned around to take another look at his father’s new hairdo and realized that the hair was really all gone. So the little boy once again leans his head into his arms, lets out a loud squeal as he sobs—histerically crying with one hand on his head.

Looking at the hilarious devastated baby’s reaction, his mother can be heard laughing while filming the video.

Greg trying to calm his son down.

“I didn’t expect any of this! We just thought it was a fun moment to share with family and friends. And now it’s everywhere. Mason is such a charmer, fun and loving. He always has a smile on his face,” told Melissa.

Mason definitely needs some time to calm down and hopefully, he’ll be able to make amends with his dad’s new haircut.