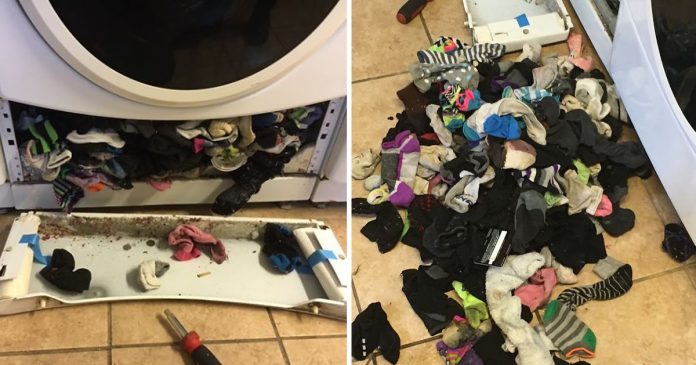 Missing socks, bobby pins and loose change are one of the many mysteries of life. They always seem to disappear without a trace. We always joke around that the washing machine eats our socks, but what if this were really true?

One couple, who work as property managers, claim they have the answer. They discovered a washing machine compartment ate dozens of socks!

California-based Cathy Hinz, who manages a manufactured home park, told Bored Panda that her husband made a shocking discovery while attempting to fix a broken washing machine.

“Now, for those of you that SWEAR, your machine eats your small things, and have been told by ‘professionals’ and others that this fable just is not true… Here is the proof!” Cathy said.

He took the washing machine apart and was astonished by what he found trapped inside after removing the bottom compartment.

The compartment was filled with piles of underwear, socks, a credit card and even some loose change!

A total of $7 was found trapped inside the machine’s water pump.

Cathy joked that you could even blame your misplaced items on a hungry washing machine.

“So next time you are missing socks, just remember! That washing machine might just be hungry!” she added.

Sarah Rose shared an image on Twitter originally posted by Cathy, with the caption, “Soooo, I no longer feel like a crazy person for losing random socks…

soooo, I no longer feel like a crazy person for losing random socks… pic.twitter.com/EElcrcKnfB

The viral tweet, which has been liked over 83,000 times, has prompted some social media users to share their own tips!

Twitter user Matthew shared, “Check the duct that comes out of the back of the dryer, often a white, large, Slinky-like tube. Comes off and on incredibly easily.

“Socks, stuff from your pockets, etc. Cleaning it will dry your clothes faster, too.”

While others were astounded by the revelation.

[Food for thought] When I am old, I will choose to… 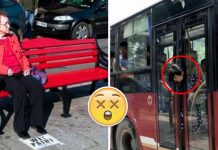 Think you have a bad day?  Look at these photos to... 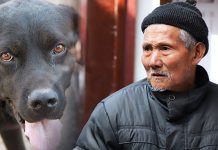 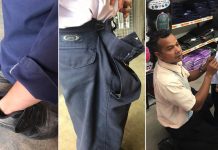 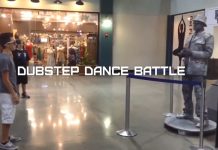 A break dancer decided to challenge a statue performer in a...

Which side do you see first? Find out what your temper...

Grandma attempts to climb a tree without any equipment—would you be...