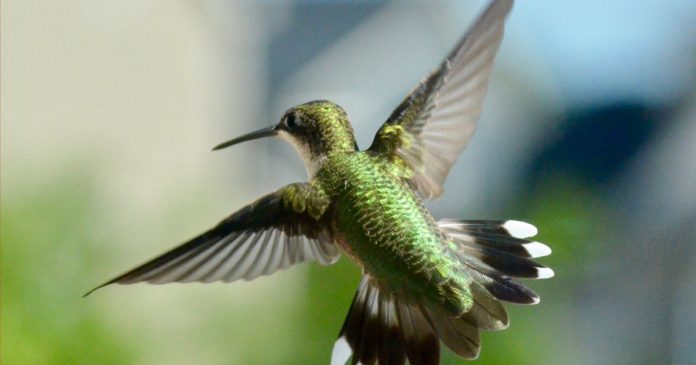 Four years ago, a former SWAT officer from Georgia, Mike Cardenaz, rescued a hummingbird when he noticed that the tiny little creature had broken its wings and was unable to fly back in 2015.

Thanks to that, Cardenaz says that the bird he named Buzz always returns each spring to show its gratitude to him for rescuing it in the past.

“Several of his feathers in his wings were broken off and he couldn’t take flight,” told Cardenaz about the day he found the hummingbird.

So Cardenaz decided to take care of the cute little bird.

Always making sure that the bird was re-hydrated and got all the nutrients it needed, Cardenaz also provided a safe place for the bird to recover at his Grovetown home. Not long after, the beautiful Buzz recovered from the injury and ready to leave the place.

“I had to wait until he molted and regrew new wings. That was 8 weeks. And he became a part of the family. He would fly around the yard and come back when he got exhausted because that was his comfort zone until he finally took off for the winter,” explained Cardenaz.

“And he’s been coming back for the last four years.”

Cardenaz was concerned when Buzz didn’t return at its usual time of the year, but just two weeks later, the hummingbird made it back from his annual migration to Central America.

Cardenaz was sweeping off his front porch,

And he saw Buzz coming, landed on his hand.

Many hummingbirds spend their winter in Central America or Mexico, and often fly alone on the same path they have flown earlier in their life. Hence, the hummingbird that always returns to Cardenaz’s place is most likely the same bird from four years ago.

They have the cutest relationship ever!