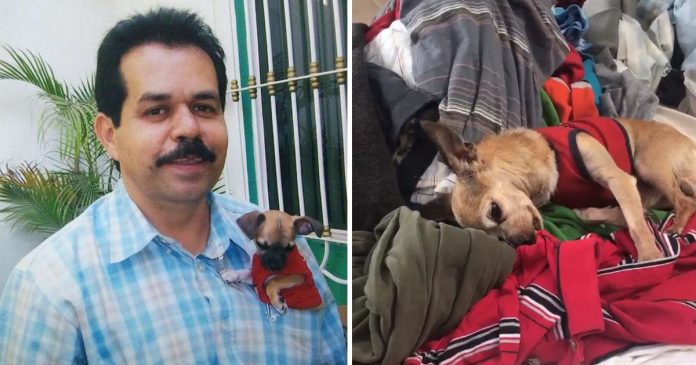 Paquito and Evlyn Castro’s uncle were best buddies for years. They never stayed away from each other for long. Everywhere Evlyn’s uncle went, Paquito tagged along. Their bond was so special that people around describe them as a father-son relationship rather than a pet-owner relationship.

It was all sunshine and rainbows until Evlyn’s uncle was diagnosed with a sickness six years ago. At that time, neither Paquito nor his ‘daddy’ knew that they were about to part ways. He eventually passed away and the poor chihuahua was filled with utter grief.

Paquito was loved dearly by his family members so they did all they can to help him cope with the sudden loss. In time, he indeed recuperated until recently, it became evident that ‘daddy’ never really left his mind.

Over the weekend, Evlyn and her aunt were clearing up boxes of clothes that was drenched in a recent storm. It contained mostly clothes of her uncle’s. As both of them were spreading the clothes out on the floor to speed up the drying process, Paquito leaped in on the pile of shirts. He planted himself comfortably on the clothes and started sniffing them.

After a while, he began to snuggle himself into the clothes and continued doing so. Paquito seemed to have recognized the smell of his owner and didn’t want to move away. As Evlyn and her aunt were finishing up the cleaning, he just laid on the shirts and occasionally nudged his head into the pile as if his owner is petting him.

It was certainly an emotional moment for Paquito as well as everyone who watched the video. Through this, it was clear that true love has no shape and image. It will transcend beyond time and space to live in the memories of the ones remembering them. Paquito and his owner’s bond definitely did.

With long lashes and beautiful feathers, this secretary bird is so...