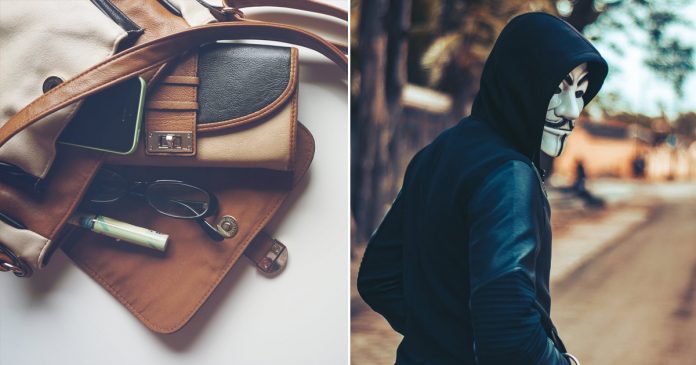 A Reddit user with the handle Gemmadarling posted a terrifying true story of her creepy stalker that will send chills down your spine.

The first ever instance she was harassed by a stalker was back when she graduated high school. That summer while living with her parents, she stayed up late packing for a camping trip with her friends. She had left the window open as she sat folding her clothes because of the unbearable heat.

She said, “It was around two in the morning and the next thing I knew, there was a hand coming through the gap in the screen of my window. I screamed and the hand flew back out.” She thought it may have been a prank her brother was playing on her but when she looked out the window, she could see the figure of a man among the trees staring at her.

She ran to her brother’s room and sure enough, he was playing video games there. They then called the police to search the area.

Unfortunately, they found nothing but warned her and her parents to lock the doors and windows in case he attempts to come back. Her mother had a feeling he would come back so she kept watching in the porch. She was right, about 20 minutes later she saw a man dressed in black sneaking along the treeline to their backyard. She yelled out and the figure ran off. They called the police again but they found no trace of him.

Her parents installed motion sensor lights above her window and she never opened them again, not even the curtains. There were no further incidents. After six months, she decided to rent an apartment with her friend downtown and although it wasn’t much, they were excited to be living in the city. The downside was that it was street parking only.

She recalled “After a few weeks, my car was broken into. Nothing was taken but a single rose sat on the passenger’s seat. It was creepy but I vowed to be vigilant and safe. Things quickly began escalating at this point. My car was broken into at least once a week. Most of the time, a flower was left (which I always threw on the ground) but once a pair of men’s underwear was left. And even more creepily, once a bag of Tootsie Rolls, as they were my favorite candy.”

The incidents increased such as when she was unloading laundry in the basement of her apartment one day and realized that all her undergarments were gone.

When she had a male friend from school over, his tires got slashed during the visit. She then received a letter that described a love for her that had been going on for years and he noted things that proved he was watching her closely. She had already started making plans to move out and found a friend to take over her lease.

She moved to the other side of the city in a secured building with an underground parking garage only accessible to tenants. Things were quiet for a few months until her roommate, Ashley, brought home her new boyfriend. He introduced himself as Matt and they were wary of him from the beginning. They met on Myspace where he approached her first. While Ashley was a great person, her new boyfriend didn’t look like the type to go after someone like Ashley. He was extremely good-looking and Ashley thought he was her Prince Charming.

He was always seen sporting an uneasy smile and it was hard to carry out conversations with him because he would spurt random facts that were completely unrelated to the topic at hand.

She created a dummy Myspace account to find out more about Matt. It didn’t look like he really knew his “friends” in real life and the information about him was vague. They tried to tell Ashley something wasn’t right about Matt but she would quickly get defensive and end the conversation. Matt started hanging out at the apartment more often, even when Ashley wasn’t around. One day, she came home and was annoyed to find Matt watching TV with a beer in hand alone. She grabbed a beer and snacks and went into her room.

She then heard a knock, it was Matt. He wanted to watch TV together and get to know her better since they both cared for Ashley. She reluctantly agreed and tried to focus on the movie because she didn’t want to talk to him. She recalled “At one point, I glanced over to Matt and he was staring at me with a smile on his face. I snapped a “WHAT” at him and he just continued smiling and said, “I just can’t believe it”. Believe what, I asked. He said nothing and went back to watching the movie, still smiling.”

She decided to leave and locked herself in her room, the interaction gave her chills.

A month went by and Matt was practically living in the apartment. On their six month anniversary, she saw a huge bouquet of flowers on the table with a card next to it. She rolled her eyes but decided to peek at what the weirdo wrote on the card. To her horror, she recognized the writing from the letters her stalker had sent her previously. She kept them in a drawer as evidence and compared them, only to find out they were indeed the exact same handwriting.

She called the police first, then called Ashley to ask her to come over. The police took down her statement and went to Ashley’s workplace to get more information on Matt. It broke her heart and she left him furious messages even though the police told her not to say anything. He completely disappeared after that. He did not work where he said he did and he didn’t introduce Ashley to any of his friends saying they had a fallout because he was spending too much time with her. Essentially, she was dating a complete stranger.

They went through the things he left in the apartment. He had pictures of her, all taken without her realizing and there’s even one that shows her sleeping in the new apartment. He also kept pictures of her from the first incident which meant he was the same creep from back then.

They found her undergarments in his bag and a necklace she didn’t realize was missing along with other sick souvenirs.

The police never tracked him down, Ashley and her grew apart and she decided to accept a job opportunity overseas. She says finally, “Being stalked changes you. Even when I lived across the world, I looked over my shoulder everywhere I went. I still have no social media accounts attached to my real name. I am married with children and know that he moved onto to torment some other poor woman. But every time I visit my hometown, I am tense and keep a low profile. Part of me will always worry that Matt will resurface again.”

Watch the animated story below: