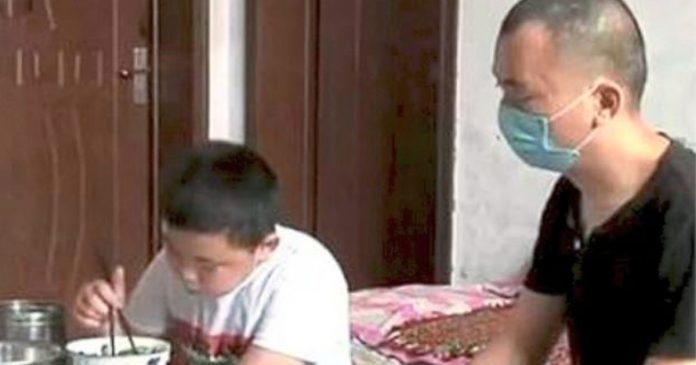 “Save dad first, lose weight later.” This is the mantra of an 11-year-old boy who is determined to save his father.

According to The Star, Lu Zikuan is a Primary Four student hailing from the city of Xinxiang in Henan, China. Over the past three months, he has gained more than 20 pounds as a result of eating five meals per day to help his father who is diagnosed with leukemia.

His father, Lu Yanheng, is being treated for his condition for the past seven years. Unfortunately, his health began deteriorating last August and doctors suggested that he needed a blood transfusion as soon as possible.

He was required to get a bone marrow transplant. It’s a risky procedure and can only be done with a healthy, compatible person. When his family members were tested for donors, Zikuan’s bone marrow was the most compatible with his father’s.

He was healthy too. However, there was a problem. He only weighed a little over 66 pounds and the ideal weight for the transplant is 110 pounds.

Since then, his only goal has been to reach the target weight for the procedure.

Zikuan’s meals include fatty meats and rice but it’s not easy for his family to provide.

Since his father is bedridden, his mother has been the sole breadwinner of him, his grandparents and his eight-year-old twin siblings.

She works multiple odd jobs and spends most of the money on her husband’s and in-laws’ medical expenses. Little of what’s left is put into providing meals for her children and herself.

Zikuan’s teacher prides that he has always been a smart student. Initially, when he gained weight, his classmates started calling him names but eventually stopped it when they found out the reason behind it.

His school even started a fund drive to help Zikuan save his father’s life. Good things come to those who persevere, and Zikuan definitely deserves it for being a hero for his family.