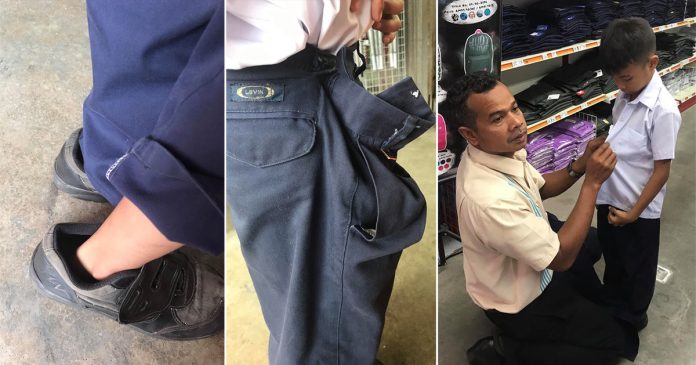 Mohd Nasir is a teacher from Malaysia. On of his usual days at school, he noticed the unusual stride of a Grade 3 boy. He was seen dragging his feet across the schoolyard as he walked. Curiosity got the better of Nasir and he stood there to observe the kid for a while.

That’s when the teacher noticed that the boy was actually struggling to hold his baggy pants in place, afraid that the trousers will slip down to his feet had he not secured it with his hands.

His shoes were also too big for his feet.

He approached the student and found out that he was actually wearing his Grade 6 brother’s uniform. Nasir understood that the boy might come from a less fortunate family hence they couldn’t afford new pairs of uniforms and shoes for him.

“I asked him why was he walking like that. He told me that he couldn’t walk properly because his shoes were too big for him. I could fit three fingers in the space in his shoes,” Zain shared.

Nasir felt that he could help the kid so with the permission from the school principal, he brought the boy to the neighboring town to get him a fresh pair of uniform and shoes that fit him.

Despite not having much money himself, he felt that something as small as an ill-fitted uniform could hamper the student’s academic performance and make him an easy target to be picked on by fellow students.

The boy eventually scored himself a new pair of trousers and a belt, as well as a pair of shoes. They tried on at the shop and the boy returned to school donning his new look.

Time and time again, we are humbled with stories of kindness that makes us hold on to the little hope left for humanity.