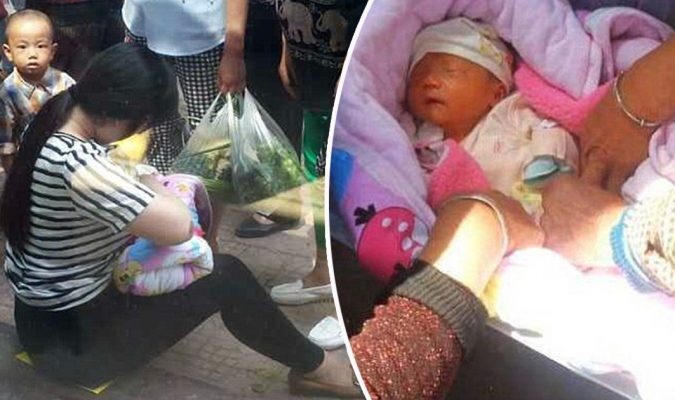 “The Most Beautiful Mother”, a name that was given to a woman in China after her loving act of caring and breastfeeding an abandoned baby girl that was left by a roadside in a Beiwei village.

The incident happened in the city of Xianyang located in the province of Shaanxi. The baby was found in a box, crying out of hunger.

Due to that, a 27-year-old mother (remained anonymous), filled with sympathy towards the baby and without any hesitations at all, held the baby girl close and breastfeed her.

Based on reports, a woman named Wei who worked at a real estate company was the one who saw the box outside of her office.

At first, she did not look at the content of the box and thus not suspecting anything from it. She thought that it was just garbage. But not long after that, Wei heard a tiny voice of a crying infant. It is only then she realized the sound was coming from the box.

Wei was not the only person who heard the cry, but other pedestrians who took that road as well. One of them quickly opened the box and was shocked by what was wrapped in a blanket, a baby girl, with a milk bottle and 100 yuan. (USD 15)

However, the baby was in a good condition. A person from the crowd took the baby out of the box and placed her under a shade as the box was placed under direct sunlight. From the loud bawling of the baby, it was understood that she was awfully hungry.

The unnamed 27-year-old mother recently gave birth prior the incident and she was also one of the witnesses at the time. She stepped out of the crowd and with full of love and care, she carefully held the baby, brought her to a corner and breastfeed her until she was full and stopped crying.

By the time the Xianyang City’s police officers arrived, the baby was already on the lap of the unnamed woman, being content and not crying. Other witnesses also donated some money and inserted it in the baby’s blanket.

It was reported by a social worker in Xianyang City that the baby suffers from muscular
disabilities and some other possible shortcomings. Thus, requiring further examinations.

The story about the woman who became “The Most Beautiful Mother” caught the attention of many people. Many praised her on how she calmed the baby with her instinct of a mother.

Despite the praises, there were also people who decided to criticize the woman’s act, labeling it as causing danger to oneself as they were worried of the baby’s well-being and if it might infect the woman and her own baby later in the future. Critics’ selfishness aside, the woman had the love and tender of a mother, which eventually saved the baby.

The unfortunate baby was brought to Xianyang Social and Welfare Center to be further
examined and placed in custody.

The police on the other hand, conducted investigations on how the baby was abandoned by the birth-mother on the roadside.