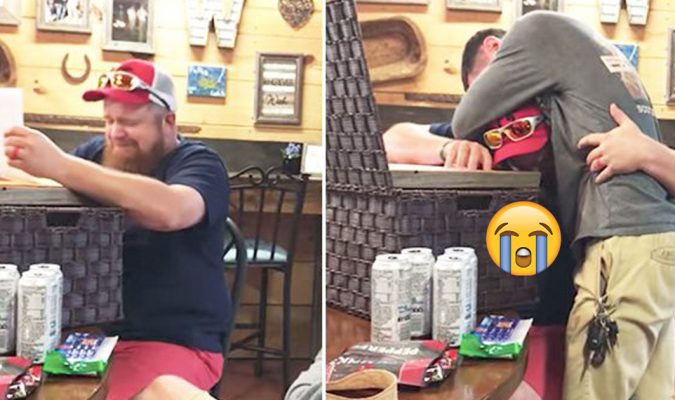 Stepdad thought his stepson’s gift was already touching until he realised that there was another surprise waiting for him.

Blake Wilson, 34, has been a stepdad to Tyler Dukes since Tyler was 13. They are not father and son by blood, but their genuine love towards one another definitely teaches us something about unconditional love!

On Father’s Day, Tyler wanted to surprise him with a gift that would show his sincerity in loving Wilson as his father.

In a video recorded by the family, Wilson opens up Tyler’s gift and finds a photo frame with a poem written by Tyler himself as a tribute to Wilson:

“Some people would say you’re not my real dad, but we know this isn’t true. For you’ve been a real dad to me in all the things we’ve been through … Although we’re not tied by bloodlines, the love and trust you’ve given me is a precious gift … Is a precious gift, day after day and that’s what counts as a Real Dad to me. So can we make it official…….”

It brought Wilson to tears to receive such precious gift by Tyler himself. But that was not the end. He later found an envelope taped to the back of the photo frame. Thrilled, he opened the envelope and there were adoption papers! There were official papers requesting a name change as Tyler wanted his named to be officially changed from ‘Tyler Dukes’ to ‘Tyler Wilson’. He wanted Blake to become his ‘real dad’.

“Blake’s been a father to Tyler since he was 13 so they’ve been extremely close and you couldn’t tell they weren’t biological”, Tyler’s mother, Angela Wilson said.

“Last year he came to me and told me he wanted it to be official and legal and that he wanted Blake’s name.

“He wanted to do it on Father’s Day so it would be memorable and more meaningful. We had never really discussed it with Blake was already his dad in every other way.

“His biological father hasn’t ever been around and hasn’t seen him in years,” she added.