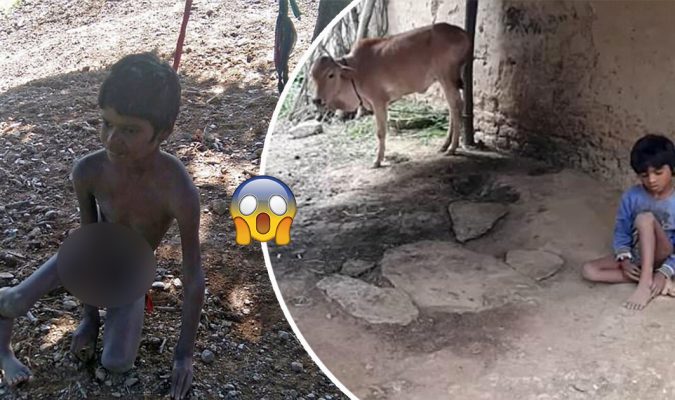 In August this year, two children with disabilities were rescued after being tied up to trees for five years by their families who wanted to ‘avoid problems’.

One was tied in the entrance of the barn by his grandparents because he was ‘violent’, while another one was tied naked to a tree by his father who would do that every day before going to work.

It is believed that Jiva Ram, 11 from Baydi village in Udaipur has been suffering from polyomyelous and mental breakdown and was tied to a tree outside of his house by his father, Huma Ram, 35, before heading for work on his farm.

Another disabled boy named Umesh, eight, from Kolyari in Rajastan, which is a northern state of India has a poor vision and a mental disability. Both of his parents Bhagawti Lal and Manu Devi passed away five years ago because of HIV disease, resulting in Umesh to be taken care by his grandparents.

“He had harmed himself in the past. To avoid any problems we had to keep him tied,” mentioned his father.

“Umesh was a normal child till he was three. But after his parents died he started behaving differently. We don’t earn enough money to get him treatment. He’s sometimes violent and leaves home without anyone knowing. We are old and cannot run around looking for him. And so we have to keep him tied up,” said his grandmother, Peepi Bai, 75.

Fortunately, the two boys are free and have been taken to a shelter home by representatives of the Child Welfare Committee, the NGO Aasra Vikas Sansthan and the Child Rights Department.

Bhojraj Singh, the founder of Aasra Vikas Sansthan investigated the case when he heard a few reports from other people and was shocked to see the boys were tied to a tree ‘like animals’.

“Javi was found naked while one of his legs was tied to a tree, whereas Umesh was tied to a bamboo pole, among the cattle. We shall start their treatment and help them grow into good human beings,” he said when picturing the whole situation as a heartbreaking incident.

Her husband took everything and left, leaving only a piece of...