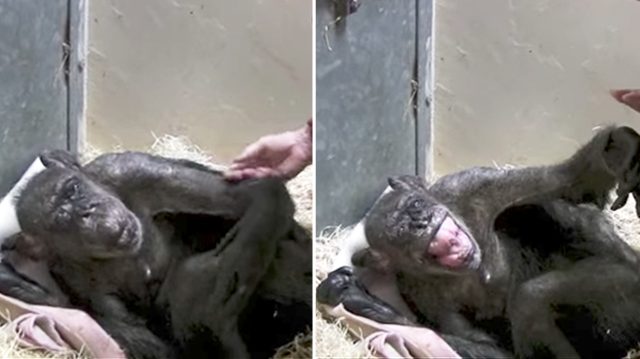 A viral YouTube video has captured a charming moment of tenderness when a 59-year-old chimpanzee, who was gravely ill, was reunited with her old researcher and friend. The chimpanzee’s affectionate bond with the scientist will bring tears to your eyes!

At the advanced age of 59, Mama was the oldest chimpanzee in Europe. She was the matriarch of the famous chimpanzee colony of the Royal Burgers’ Zoo in Arnhem, the Netherlands.

In the footage, a severely sick Mama was resting on a straw bed. She was too weak to eat or move around.

Knowing that Mama would die shortly, Jan van Hooff, a Dutch biologist and an emeritus professor of behavioral biology at Utrecht University, paid Mama a visit.

Hooff, well known for researching primates, was the founder of the chimpanzee colony in the Royal Burgers’ Zoo. He had known Mama since 1972.

Upon seeing the lethargic Mama curled up in bed, Hooff stroked her gently and attempted feeding her.

The emaciated Mama took the food without realizing who the person was at first.

When she looked up and saw who it was, she immediately recognized her dear human friend and companion. Ecstatically, she opened her mouth widely and made a high pitched sound of pure delight.

She wrapped her arm around his neck in a loving embrace.

It was probably the last time Hooff came into contact with Mama, as, shortly after the heartfelt meeting, Mama passed away on April 5, 2016.

“Many people I have given tours to, after lectures and with training courses, have known her. When we arrived at the chimpanzee quarters, Mama always came running towards me from the farthest corners to excitedly greet me from the other side of the moat in chimpanzee language with a loud panting ‘oohooh!’” Hooff said, according to the Royal Burgers’ Zoo website.

“This past year it became more and more difficult. Each time it took her longer before stumbling she reached the moat. I will definitely miss her,” he added.

The video of their last encounter was shared by Hooff on YouTube, and many people are touched by Mama’s affectionate reaction.

“Absolutely beautiful and brought tears to my eyes. Wow,” one YouTube user wrote.

“This made me weep like a baby. As a 31 year old male it’s hard to cry,” another commented.

Watch the Video Below: