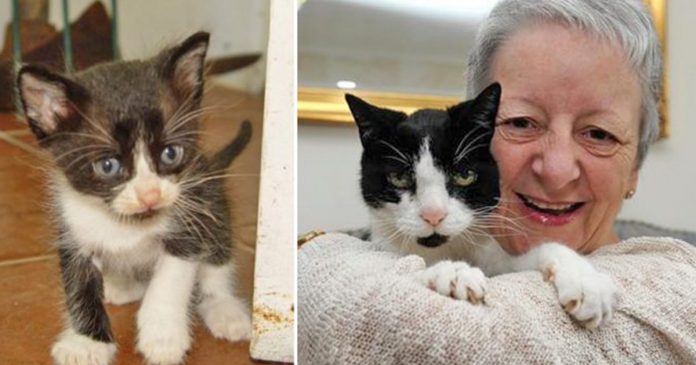 Owning a cat has many benefits such as reducing stress, companionship or just for fun. But for Sue McKenzie, a cat owner in UK, can thank her cat for ‘saving her life’.

Sue McKenzie said she became concerned when her black and white pet cat Tom began repeatedly tapping the back of her neck and tried to warn her of something abnormal.

She then went for a medical checkup and discovered that she was diagnosed with Hodgkin Lymphoma, a cancer of the lymphatic system which greatly affects the immune system of the body. 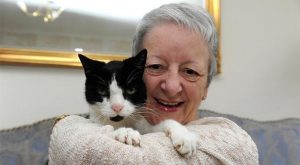 Sue adopted Tom more than 20 years ago after she found him around her house, looking for food. Tom, whom was a just little kitten back then instantly captured Sue’s heart and he began to live with her and her family ever since.

“Tom has never been a very loving cat – he doesn’t come to me for cuddles very often.”  ‘He lets me stroke him and he likes to sit next to me but he doesn’t actively seek out human contact and he very rarely comes to pet me.” 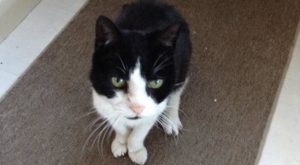 Sue adds further that Tom is never fussy. Thus, when he began to behave strangely, Sue was concerned about his health. “So I thought he was behaving very strangely when he suddenly starting coming to sit next to me, very straight, and tapping his paw on the back of my neck while meowing incredibly loudly.” She said.

Tom is already 24 years old, that is a huge achievement for a cat to live that long.

Concerned for his health, she brought her to a vet but there was nothing wrong. Tom is a very healthy cat despite his old age.

Tom continued to tap on her neck after their visit to the vet until Sue came to realise that she had a lump on her neck. With Tom continuously tapping his paws on her lump, Sue was concerned that the lump might have indicated a more serious problem. She went to see a doctor and the lump was proven to be a malignant tumor.

The tumor had already grown big, at Stage 3, so Sue underwent surgery to remove it. She also went through chemotherapy.

Sue immediately went through a surgery to remove the tumor.

She also had six rounds of chemotherapy and was finally declared cancer-free afterwards. 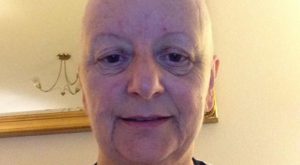 Sue was very grateful for Tom’s persistent pawing and tapping on her shoulder. “I suppose it is all thanks to Tom, he has saved my life in a way.”

Funnily, Tom no longer being affectionate towards Sue like he did after he detected cancer on Sue’s shoulder. He has returned to old Tom, playing by his own and minding his own business.

So, the next time your cat suddenly begins to tap your body continuously, you may want to take extra caution. Tom has certainly did a great job by alerting his owner about the terminal diseases. Well done Tom!