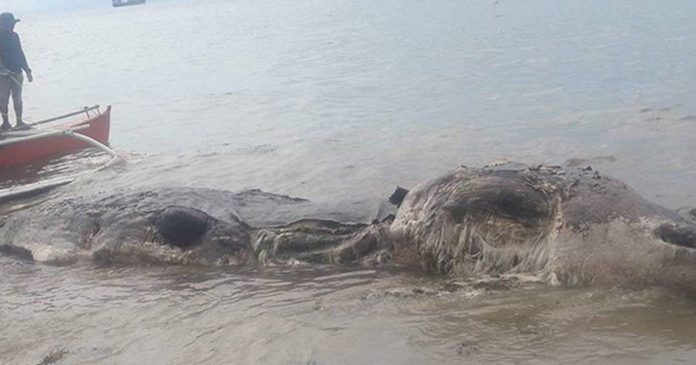 Nobody knew what exactly this gigantic dead sea beast was when it washed up on a beach in the Philippines. Can you figure out what species this sea creature carcass belongs to?

Beachgoers were dumbfounded when a 32-foot (10-meter) long, mysterious, decomposed creature was found in the shallow waters off Maasin City on Leyte Island, in the Philippines. 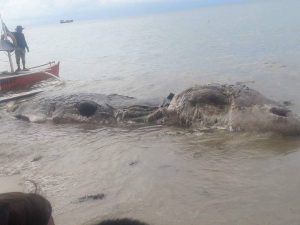 The decomposed remains of this unknown animal were a baffling sight. 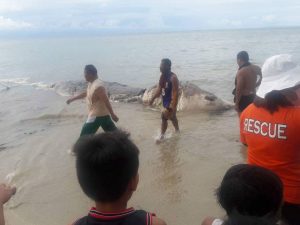 Not only did the strange beast, with its large head and grayish skin, confound beachgoers, it also puzzled experts from the Bureau of Fisheries and Aquatic Resources.

Julius Alpino, from the Bureau of Fisheries and Aquatic Resources, explained that the odd-looking carcass could not be identified due its advanced state of decomposition.

Nujnuj Capistrano, a 42-year-old photographer who posted snapshots of the sea beast on Facebook on Sept. 21, thinks this animal, reportedly the length of a fighter jet, could be a whale.

“I was just passing by the beach and took some photos but I don’t know about the details. I was surprised because it’s too big and it’s the first time I saw that kind of creature,” Capistrano said.

“I don’t know what they did with it but one thing is for sure, the creature was already dead when I saw it. The smell was too bad. I can’t describe it, but it was a bad smell,” he added.

The bizarre corpse apparently smelled so bad that it was declared a health hazard. 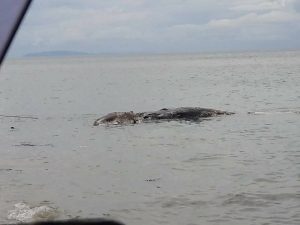 Thus, city officials decided to tow the dead animal out to the deep sea, as it could not be buried due to its size.

This isn’t the first time peculiar sea beasts have been washed ashore in the Philippines. 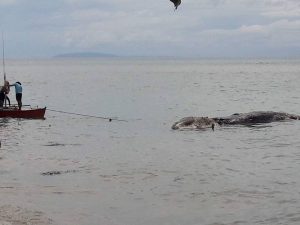 In February, a 20-foot-long, huge hairy creature was found washed up on the shore of the Dinagat Islands.