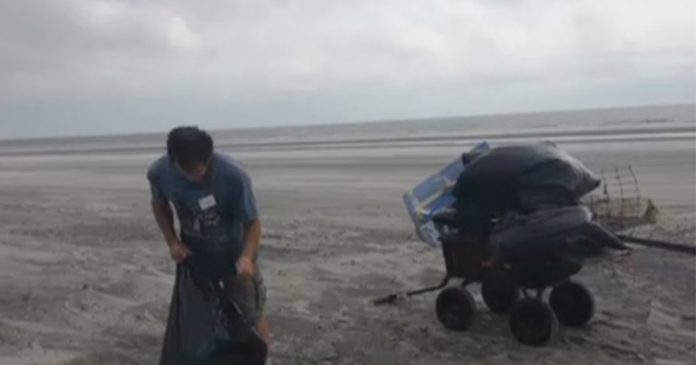 When Hurricane Irma hit the southwest US earlier this season, it caused mass devastation—but amidst the rubble, one couple discovered something miraculous.

After the storm, Linda Shouse Humphries and her husband, David, from Georgia, volunteered to help sweep up the local Sapelo Beach. 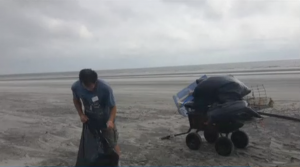 There was debris all over the sand.

But as David was picking up washed-up bottles, he noticed there was something different about one of them: It looked like there was a piece of paper inside.

“I got closer and I could see a diagram or something, he recalled to WTOC. “I opened it up and the wind was blowing and the light was bad, and I saw this child’s writing.”

He realized what it was: A message in a bottle!

David called his wife over, telling her that he “found treasure.”

The message inside was written by an 8-year-old girl named Miranda. The message included an address, and asked the reader to send a reply. Linda thought it was cute, probably something a kid had recently tossed into the sea.

“I started reading it and I thought ‘Oh our daughter Olivia can write her back,’” she told WIS.

“And then I looked at the date.” 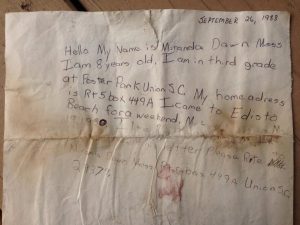 The Humphires were stunned that they had unearthed a message that’s been floating around for nearly three decades—one just narrowly saved from being thrown away with the debris.

They knew they had to track down the now-37-year-old sender and let her know the message had been found.

The good news: they knew her full name—Miranda Dawn Moss. The bad news: the address listed didn’t even exist anymore, and there was no one in the town by that name.

Years ago, this would’ve been a dead end. But the Humphries had another option. 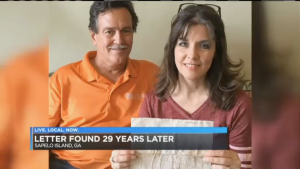 Linda posted a photo of the letter to her Facebook page, asking if anyone had any information about the sender.

Soon after that, a friend sent her a message—she had found the page of someone with that name. 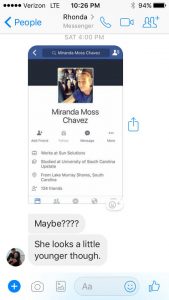 Linda decided to reach out to this woman to see if she was the same Miranda Moss who sent the letter three decades ago.

“Hi, found this message in a bottle from Miranda Dawn Moss from Union, South Carolina, age eight, dated 1988,” she wrote, according to WTOC. “Is that you?”

And incredibly, she soon got her reply:

“The moment I looked at it I knew it was mine,” Chavez told CBS News. “Granted, I had forgotten about it. It had been 29 years.”

Even so, at 37-years-old, Miranda Moss Chavez still remembers making that message in a bottle, on a brisk September day in 1988. 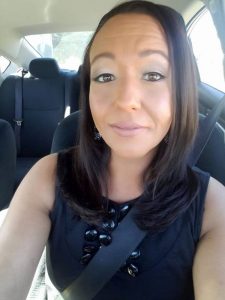 “It was during a time when we were really encouraged to have pen pals,” Chavez told WIS. “I thought that doing something like this would be a really neat way to get one.”

She launched her message from Edisto Beach, South Carolina, where she was staying for the weekend—90 miles from where it would be found.

“I remember my mother being really insistent on writing the date on the note for me,” Chavez told CBS News.

“I threw it as far as I possibly could. I was afraid I would leave and it would wash back up on shore.”

She hoped a pen pal would find it and reply—but her hopes were dashed a year later, when Hurricane Hugo struck South Carolina.

“I thought that it was probably gone forever,” she told WIS.

Little did she realize that decades later, a different hurricane would lead to its discovery.

And while it took longer than expected, she finally got the pen pals she always wanted.

The Humphries agreed to send her letter back to her—and included a bunch of other gifts: Merchandise from Sapelo Island and info about the place where her message ended up. 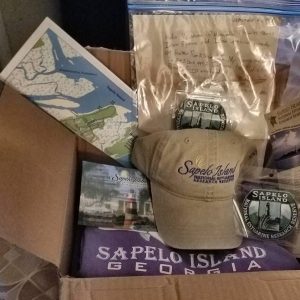 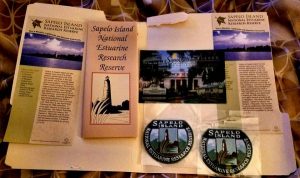 The couple have even invited Chavez down to visit.

Not only has Chavez become friends with the Humphries, she’s reconnect with people from her childhood. She had moved away from her hometown as a teenager (which is why she was so hard to track down), but when the story broke, people from her past have reached out.

“I lost contact with all of those people when I moved from that town,” Chavez told CBS News. “Not only have I made new friends, like Linda and David, but I’ve also been able to reconnect with people.”

All this, thanks to that long-forgotten message in a bottle.

“Who would have thought?” she told CBS.

“It’s so awesome how something that small — no matter what you’ve got going on in your life — can take you back to your childhood and to some of the absolute happiest times of your life.” 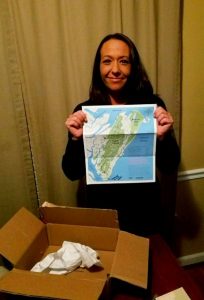