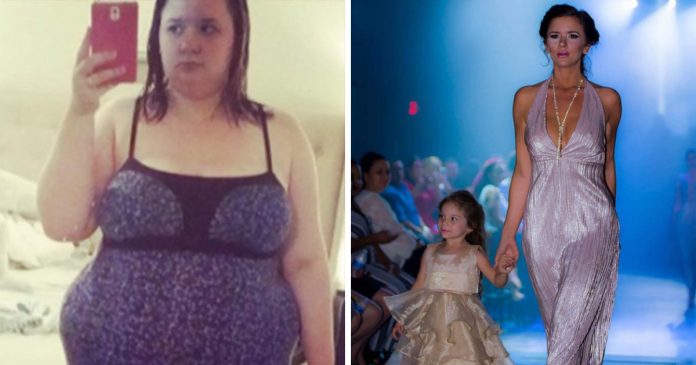 This 28-year-old woman was a victim of “emotional eating”—her boyfriend was unsupportive of her quest to lose weight. She fought against all the odds and is now thriving as a fitness coach.

In 2014, Christine Carter was weighing an incredible 275 pounds (approx. 125 kg). She also suffered from health issues as a result of excess weight.

When embarking on a new journey-it’s easy to feel daunted, overwhelmed….terrified. I read a quote yesterday that I love…”you can never cross the ocean unless you have the courage to lose sight of the shore”. Courage isn’t something you wake up with. It’s found in the small improvements we make on a daily basis. It’s constant repetition of these improvements. It’s knowing that there is no ‘try’…you either do or do not. Today-whatever is stopping you or holding you back…reach deep down and find the courage to push past it-even if just a little. Choose to DO today.

Christine had a boyfriend who did not support her fitness goals.

“He was very controlling, told me what to wear, wanted me to be fat so that I wouldn’t leave him and didn’t like me having me own friends. Being overweight I didn’t feel I deserved anything better—I went from a place of being ‘fat and happy’ to just ‘fat,’” she said.

Christine gorged on sugary foods and was also addicted to smoking and alcohol. All these factors contributed to keeping her fat.

“You may encounter many defeats, but you must not be defeated. In fact, it may be necessary to encounter the defeats, so you can know who you are, what you can rise from, how you can still come out of it.” -Maya Angelou . In the first picture I felt more than defeated…I was lost with no direction. I never thought I would succeed. . But one small step at a time turned into small victories. Did I encounter defeats on my path? ABSOLUTELY. But as time went on I had to develop the perseverance and determination to never give up. . No matter where you are-just start. Start today. Start right now. Don’t be afraid of failure…no matter how defeated you feel.

And it almost seemed as though she was doomed to spend the rest of her life being overweight. But in 2014, she decided that enough was enough. She underwent a gastric band surgery in August that year, which helped her shed off almost 50 pounds (approx. 23 kg). But she soon began to gain back her weight. And that is when Christine got in touch with a personal trainer.

Self-sabotage is a bitch. It really is. It is as defeating as it is self destructive. Here you are doing so great: exercising, eating right, and then—(insert bad choice here). Mine is chips and queso. What I’ve learned is that the key is not to master being perfect. The key lies in how you recover from setbacks. You have to learn to forgive yourself and get right back on track: EVERY. DAMN. TIME. If you fell off track this week-it’s okay! Love yourself and get right back on your journey to greatness. Love you guys so much! ?

She signed up at the Hero training center and began to live on a nutritious, healthy diet, and gave up her sugar-heavy, high-calorie meals.

She also started working out, slowly at the start. Despite the grueling exercises, she stuck with the advice of her trainer. By 2015, she had lost an extra 100 pounds (approx. 45 kg).

The motivation to start comes from the discomfort of where you are and your desire to change? But the motivation to keep going is shifting your mindset from “I hope I can” to “I will not stop”. It’s going to take everything you have. You are going to feel like giving up. But you know what’s more challenging than the struggles of a weight loss journey? The pain of living with regret. Don’t wait. Start now. The only thing you have to lose is the weight. ?

Christine’s joy knew no bounds. She had successfully reduced her weight from 275 pounds (approx. 125 kg) to less than 125 pounds (approx. 57 kg) through her determination within a period of 16 months. She was slim and fit, free from the excess fat that had made her life a living hell.

“Weight loss has changed everything about my life. I am not the same girl I once was. It ended my relationship—my ex became very insecure and jealous and I gained the confidence to see that I was not in a healthy relationship and needed to get out,” she said.

I walked in my first fashion show last night. The designer’s 6 year old daughter was supposed to walk, but was a little nervous. Right as I went to walk, he asked her if she would walk with me. She grabbed my hand and off we went. This picture captures the sweetness of this special moment. She was precious, and we all had a blast. ?

Christine’s transformation is indeed a stunning one and something that is sure to serve as an inspiration for all those who are planning to lose weight and become fit. She has 219,000 followers on Instagram and has taken up modeling and coaching.

Today is such an exciting new chapter in my life! A year ago I journaled that one day I would have a white BMW and live in a high rise. I literally had never even BEEN in a high rise…but it’s the vision I set for myself. I wrote it down, and honestly forgot about it. Today that dream came true. As I unpacked, I found where I had written down that dream and am in awe that so long ago I put something into motion simply by writing it down. I’m as nervous as I am excited about this very different lifestyle. Who do you see yourself becoming? WRITE IT DOWN and never stop fighting against all odds to live the life that you dream of. ❤️

She is reported to have said, by POPSUGAR: “I have learned to enjoy NEW things about food. I’ve learned to love cooking and am finding new ways every day to make low sugar/carb meals that taste great but don’t keep me from my goals. I’ve learned to stop EATING my feelings and find new outlets for them.”