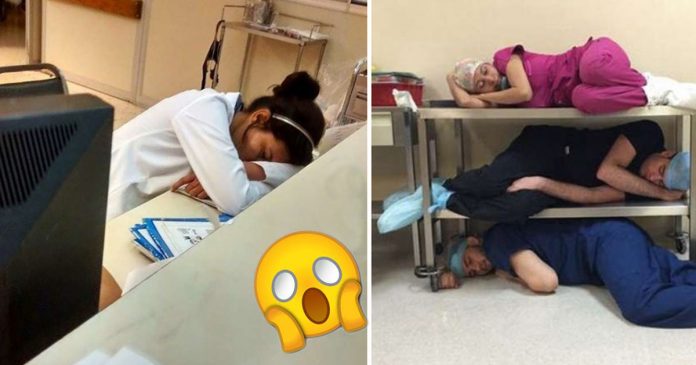 In Monterrey, Mexico, a medical resident was caught sleeping on her desk while still in her shift and this has made a Mexican blogger posted her pictures sleeping online and criticised her for her lack of work ethic. Her pictures have now gone viral on the internet and this has made doctors around the world joined forces to post their pictures where they sleep at work online.

After the incident, doctors around the world started to post pictures of them sleeping on their desk during their shift in defend of the medical resident.

A blogger snapped the below photos of a sleeping resident in Mexico at 3 a.m. The writer criticized the young resident, saying that “Doctors are obliged to do their work”!!! 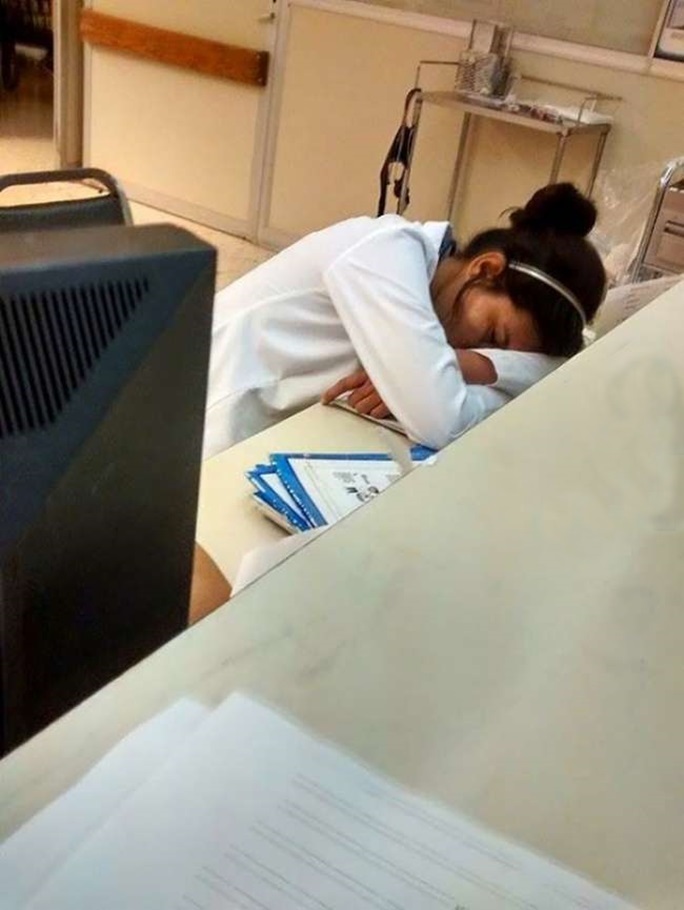 Soon, hundreds of other doctors began defending the resident…

Doctors are known to have long-working hours with extremely demanding and exhausting shifts. Kudos to all doctors for working hard and sacrifice themselves for the benefit of the society.

The pictures of them sleeping went viral under the hashtag #YoTambienMiDormi, Spanish for ‘I’ve also fallen asleep’.

Exhausted doctor posted his picture sleeping on his desk.

“We are people. Not machines”

“36 hours working nonstop is impossible without 10 minutes of rest,” wrote Paolo Perez, a surgeon in Ecuador.

After a 24-hour of non-stop gruelling shift

Imagine how tired this doctor must be after a busy shift

Not all superheroes wear capes. Sometimes, they wear stethoscopes.

“I’ve also fallen asleep as a junior doctor without harming a single patient. Try working an 80-hour shift without a break.” said @ShafiAhmed5

“#IAlsoFellAsleep 36-hour shifts, preparing for exams, no time to eat.”

Not just in Mexico, here is a picture of doctor using spare time she has to catch a short nap.

The images of tired and exhausted doctors is a real eye-opening that they are humans who have physiological needs as everybody else. It is shameful for doctors who dedicate their life to help us to be healthier do not have time to get enough sleep for themselves. Let’s spread the positive vibe and remind ourselves to appreciate and be more thoughtful to these superheroes who have make our lives better.

His Lost A Loved One Unexpectedly! Single Dad and His Daughter “Re-enacting Romantic Photos the Same Scenes As His Wife”

You Must Have Been a Beautiful Baby! 15-Year-Old Russian Beauty Has Grown Up and Graces the Internet with Her Lovely Photos

His IQ surpasses Einstein’s Score! “The World’s Most Intelligent Man” Enrolled in Harvard at 9-Years-Old; Lived a Life Full of Sad Memories

With 1 leg and a crutch, man continues to carry heavy...