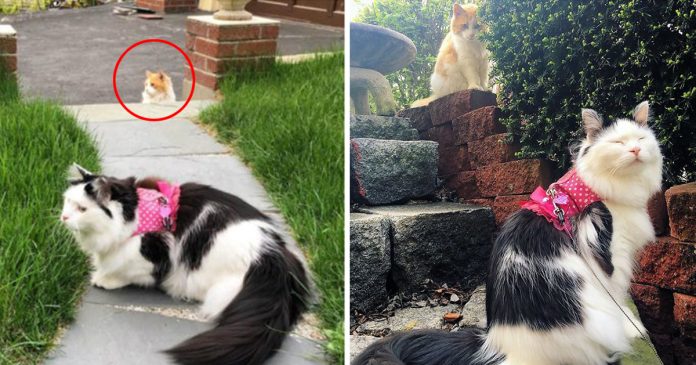 Here’s a scenario: one day a boy wakes up to find that a cute girl has just moved in next door. He is immediately intrigued by her and wants to know more about her. He starts watching her, following her around hoping that she’ll notice him. Weeks go by and she still goes about her business oblivious to the boy next door who respectfully stalks her from a distance. A little time goes by and a silent dance between the two ensues. She ignores him, he keeps staring working his way to get closer. By now, the boy would be certifiable as a potential stalker, but these are no ordinary boy and girl and this is no ordinary boy next door meets new hot neighbor and falls hopelessly in love with story.

It’s a story about two cats, Sophie and Scottie, and the special relationship they had. 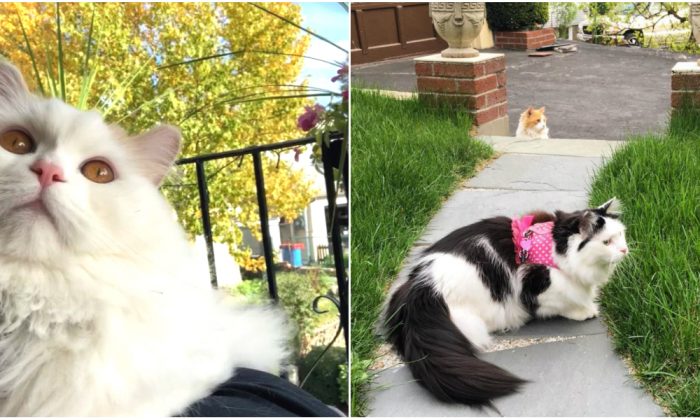 Let’s backtrack a bit for a proper introduction.

Sophie is a cuddly black and white tabby cat adopted by Christiana Viscusi in 2014.

When your vet tech sneaks in snugs in the back room at your check up. ❌⭕️

Ok, you can pat me on the head now.

She moved into a Boston neighborhood next door to a yellow and white equally cute and cuddly tom cat, Scottie.

Stay off the lawn!

When they first met, Scottie who was intrigued by the new neighbor, would sit and watch from a distance.

Sometimes when stalking the bird bath you need to bring backup. #boynextdoor

He became a normal fixture in the daily routine, always there when she was just lounging on the porch or watching the bird feeder.

First warm sunny day and everything is back to the way it should be. #boynextdoor

He started inching closer and nearer but as long as she wasn’t bothered, Sophie did not acknowledge his presence.

Have you Fall’en ? for me yet?

I can still feel you staring ya know. #boynextdoor

A couple of weeks went by before Scottie had enough nerve to go and introduce himself. His patience paid off and soon Sophie was the one who couldn’t wait to get out there and see her friend.

Every morning, Christina would wake up to open the porch door so that Sophie could go out to her pal who would be sitting out on the driveway waiting for her.

When you’re in a big hurry to do nothing and you got a lot to say about it.

They soon became inseparable. They watched the bird bath together. They would get together at night to watch the hedge and to patrol the yard, and did whatever cats do in the dark when they are alone with no humans watching. They would get together every night to watch the hedge and patrol the yard. If you would see Sophie, Scottie wouldn’t be far behind, Viscusi said in an interview with LoveMeow.

Scottie even cried at Viscusi’s door for Sophie to come out and play. 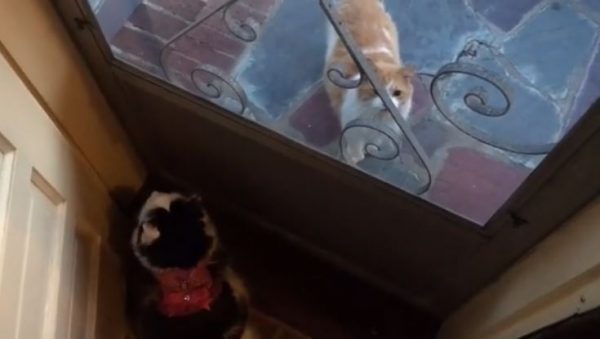 Sophie and Scottie’s story has captured many people’s hearts. Viscusi took to documenting the little encounters the two love birds shared. Soon, these two would have a social media following with an Instagram account @sophielovestuna that drew thousands of followers and hundreds of likes daily.

A lot of people were enamoured by the two kitties and thought their story was more than cute in a teenage-coming-age-romance kind of way without the angst.People watched and hoped that the romance would grow and culminate into something more but as fate would have it, Sophie passed away in June 2017 but their love will live on in the hearts of those who witnessed and were touched by it.

Fine. You can hang out while I watch this birds nest, just CALM DOWN.

A Malaysian smoker shares his incredible experience on how he managed...