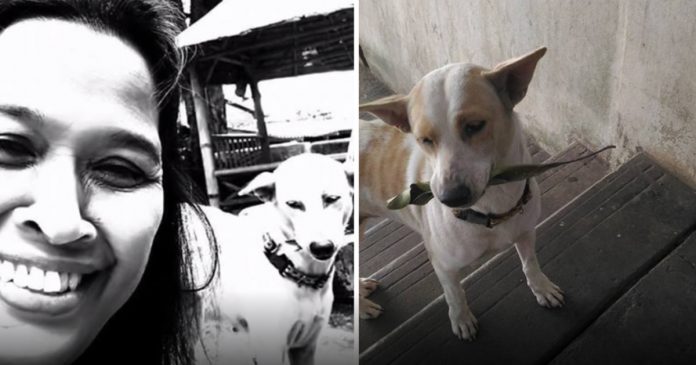 Any dog owner can tell you that there is little else in the world that dogs care about more than food. Dogs have a tendency to dance around and bark when you’re preparing their dishes. They beg at the table and pick up anything and everything that lands on the floor. Some dogs will even jump up and steal out of their owner’s hands right when they’re eating.

Dining etiquette is usually not a strong suit for most dogs, but Orawan Kaewla-iat knows of one notable exception.

Kaewla-iat is a resident of Krabi, Thailand. Every day, she goes outside to feed the stray dogs living in her area.

Most dogs chow down without a care but one dog named Tua Plu (which roughly translates to “winged bean”) always makes sure to let Kaewla-iat know how thankful he is.

Every day, the stray dog and his mother stop by for a bowl of rice, but Tua Plu always offers some sort of gift in exchange.

“When he’s hungry, he will offer something to get fed,” Kaewla-iat wrote in a Facebook post, translated by Coconuts Bangkok. “Every day he shows up with an object in his mouth—usually a leaf and sometimes a piece of paper. Before you feed other dogs, you have to feed Tua Plu and his mom.”

How Tua Plu learned about the concept of exchanging gifts is anyone’s guess but the internet absolutely loves him for it.

Kaewla-iat’s video of him has over 3 million views now and many commenters are clamoring to adopt him.

It’s a good thing too, since Kaewla-iat was moving out of her accommodation soon.

She worried that, with her moving away, Tua Plu and friends might not have anyone to feed them.

Yet, as her story spread like wildfire, I have no doubt that Tua Plu and other stray dogs in the area will be adopted soon if they haven’t been already.

Hopefully we get an update on this story. I am immensely curious to see if Tua Plu keeps up the gift exchange when he starts living in a proper home.

Watch the cute video below: