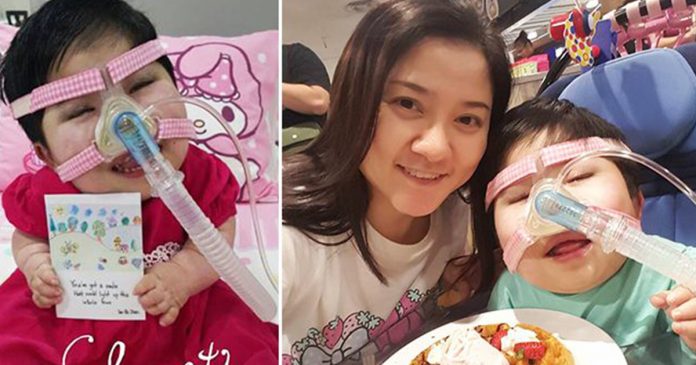 A teenage girl in Singapore suffered from an extremely rare disease, which forever trapped her in a baby’s body. Yet this inspiring young lady “lived her life to make people smile.” Sadly, she died just two weeks shy of her eighteenth birthday.

Teo Pei Shan, 17, was born with Sanfilippo disease, an extremely rare disease, which made her unable to walk or breathe on her own.

The disease also stunted her growth, and kept her looking like an infant despite that she was 17 years old

She also developed many other health problems.

According to Newsner, her father, Teo Qi Kuan said, “Each time we thought we’d overcome one hurdle, another blow would hit us and we would have to go through the roller-coaster ride of suffering and emotions”

Her mother quit her job to take care of her, which put a strain on the family’s financial situation, as they relied on Teo’s low-paying job as a taxi driver

At three years old, Pei Shan was diagnosed with obstructive sleep apnea and had to wear an oxygen mask around the clock, which attracted looks from other parents whenever the family went out

Despite her challenges, Pei Shan fought bravely and remained positive. She even learned to paint and play the piano.

However, she passed away in July of 2016, after her health had deteriorated, just two weeks before she would have turned 18 years old

Pei Shan’s piano teacher told The New Paper, “She lived her life to make people smile. She was a blessing to me too, I believe she is in heaven now”

The funeral director who helped the family with the funeral said, “There were many well-wishers and donors who wanted to pay their final respects. It is never easy for parents to have to grieve for their child. As a parent myself, I feel for them. I hope Pei Shan’s positive outlook in life will inspire them to move forward”

Many people, even some celebrities, who knew Pei Shan or had supported the family over the years also showed up for the funeral.

The family is grateful for the tremendous support. “She is everyone’s child,” her mother said

A heartwarming tale of an old man who worked as a...