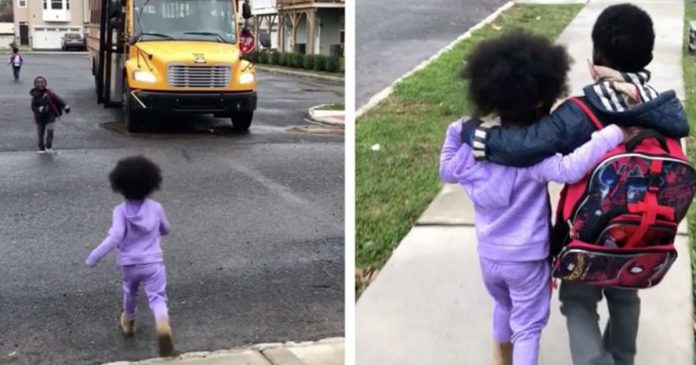 Ava and Tariq Jr. are just like every other sibling in the world. They bicker more often than not, but still find it within themselves to love each other as much as humanly possible.

Their mother, Verlonda Jackson, recently shared the most adorable video of the brother and sister and we can’t get enough of them.

Despite the way they may act towards one another, these two still love each other.

I consider myself to be a fairly tolerant parent. I don’t mind spoiling. If my kids don’t want veggies on their plate at dinner I don’t force them to eat it. And I don’t limit their television viewing all that much as long as they read just as many books. There are a handful of things, however, that can tip me over the edge into that dangerous place of rage, sadness, and self-doubt. Not listening is a big one. Whining is another. But nothing frustrates me more than when my kids fight with each other. They fight over whose turn it is with the iPad, who has more time with the iPad, and who is better at whatever game they are currently playing on the iPad. They fight over who got the bigger piece of cake, more frosting, the better plate. They call each other names and dole out insults like “you’re a butt” and “no YOU’RE a butt.” Sometimes the fighting makes me want to scream or cry, or both. I wonder what I’m doing wrong as a parent, and I lament the fact that two of the people I love the most don’t seem to like each other at times. There are days when it seems like the vast majority of their interactions are acrimonious, hostile, and exasperating. But every afternoon at 4:04pm when my son gets off the school bus from kindergarten, this happens…….they greet each other with hugs, kisses, and walk home arm and arm saying things like, “Your my favorite person.” “Thanks. Your my favorite person, too.” As a parent that’s the best I can hope for. That my babies will fight and forgive. That they will practice what it means to be a human with each other. That they will learn when to stand their ground and when to let something go. That they will learn to be siblings, maybe even favorites. ❤️ #Love

In the caption of the video that Jackson uploaded, she wrote how Ava, 3, and Tariq Jr., 5, will often fight over the most seemingly pointless things. And while it’s not her fault that one child got “the better plate,” it still frustrates her and leaves her questioning what she could possibly be doing wrong.

But it’s moments like the one she captured on video that melts her heart and makes her see how her children are able to “fight and forgive.”

Like many siblings, they choose when to fight with each other and when to be best friends.

It’s a rainy day in PA and we are headed to school. We picked out our own wardrobe! Our mommy is in looooove with designer labels, and it is nice from time to time. But she also teaches us about balance and preserving our innocence by picking out days, weeks, and months for us to look and dress like the kids we are…..as long as it matches ???

Jackson told FOX 5 that the two were each other’s first friends when they both attended the same daycare, but they eventually began to fight with each other, as many siblings do when they spend too much time with each other.

Now that Tariq Jr. and Ava are separated—Tariq Jr. attends kindergarten now—the two siblings can’t wait to see each other after school.

They are so excited to see each other after Tariq Jr. gets home from school

Jackson wrote that the two of them hugging when Tariq Jr. gets off the bus is an everyday occurrence. The evidence? She posted another video a few weeks ago showing a very similar scene.

Both times Ava and Tariq Jr. ran into each other’s arms after Tariq Jr. bounded off the school bus.

Jackson wrote that they’ll often walk hand-in-hand back home telling the other that they’re their favorite person.

The love they show for each other in this moment is so adorable.

Aren’t they the sweetest little things?

At the mall trying to hustle our parents for toys ???