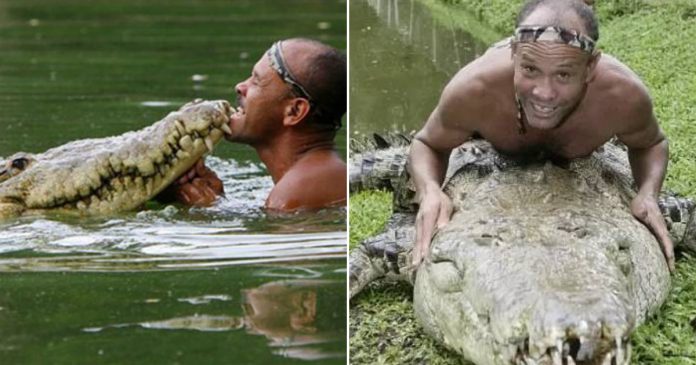 One fisherman in Costa Rica, Chito started his friendship with Pocho, a 5-metre long crocodile 20 years ago after he found the crocodile dying on a river bank with a bad gunshot injury.

Chito said, “I just wanted him to feel that someone loved him, that not all humans are bad”. “I love all animals, especially ones that have suffered.” he further said.

After Pocho recovered, Chito brought him back to the river where he first rescued him, back to his habitat. However, Pocho came back to Chito’s house the next day! It must had walked all the way to Chito’s house.

So, Chito took Pocho to live with him in his house for the next 20 years. He managed to do so with the help of The Minister of Environment and a vet.

Surprisingly, Pocho was a very gentle and adorable crocodile when he was with Chito. He even responded to Chito when Chito called his name

However, Pocho died in 2011 at the age of 50 because of natural causes. Chito was really broken-hearted when his best friend died.

Now, Chito continues to share their story to raise awareness that wild animals are not as threatening as they are always depicted.

Sure, crocodiles aren’t exactly cute and fluffy to be made as domestic pets like cats and dogs. Plus, not many people are brave enough to get near them, let alone to come close a severely injured crocodile. One wrong move and you could risk your life to death!

However, we still have to remember that they have feelings too, just like what Pocho the crocodile showed to Chito

White crane lost its way back home feels the kindness of...