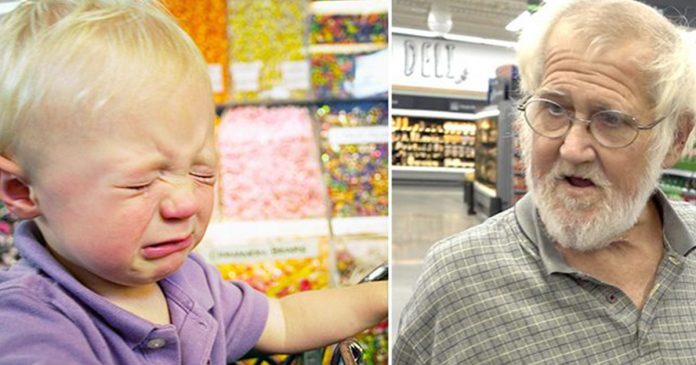 This comical tale about a grandpa’s unique way of handling his badly behaved 3-year-old grandchild was initially posted to Reddit’s “Welcome to/r/Jokes” page. Though intended as a joke, perhaps there’s something in this we can all learn from.

The narrative starts when a woman caught sight of a grandpa and his ill-behaved grandson in the supermarket.

She saw that while the grandpa was occupied with grocery shopping, the 3-year-old grandson was screaming for sweets when they came to the sweet aisle

The grandfather remained calm throughout and said: “Easy, William, we won’t be long. Easy, boy”

When the little boy made another scene, grandpa kept his composure and said: “It’s okay William, just a couple more minutes and we’ll be out of here. Hang in there, boy.”

At the checkout line, the little rascal began throwing items out of the cart. Seeing his cranky behavior, his grandpa said with a controlled voice: “William, William, relax buddy, don’t get upset. We’ll be home in five short minutes; stay cool, William.”

By now, this grandpa’s way of dealing with his grandchild’s tantrum had made quite an impression on the woman, who was watching them all along

The lady followed them to the parking lot and approached the elderly gentleman.

She told him: “It’s none of my business, but you were amazing in there. I don’t know how you did it. That whole time, you kept your composure and no matter how loud and disruptive he got, you just calmly kept saying things would be okay. William is very lucky to have you as his grandpa.”

Grandpa simply replied, “Thanks.” But then, he said, “but I’m William. The little brat’s name is Kevin.”

Didn’t expect that, did you?

We all thought he was trying to tame his grandchild, but it turned out the other way round.