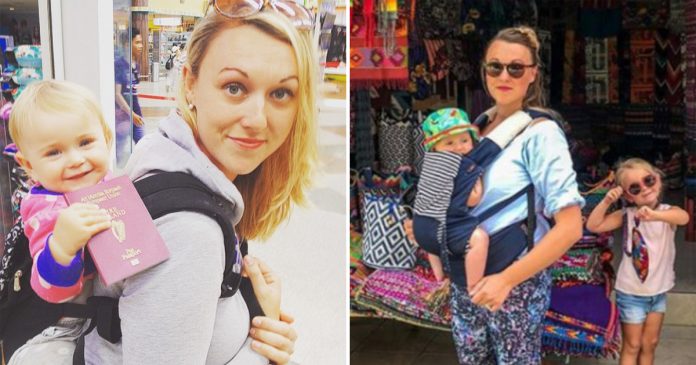 Karen Edwards loves to travel. In the eight years since finishing university, she has visited over 60 countries. When her husband Shaun Bayes arrived on the scene, the traveling continued; the two sharing many an adventure together. But then she became pregnant.

“I instantly thought ‘that’s it, travel days are over,’” Edwards wrote on her blog.

But, when baby Esme arrived, Edwards realized that, actually, now might be the perfect time to travel

Checking out all the stamps in her little passport. Just about to board flight 5 of 9 in 7 weeks! It has been raining most days her in Malaysia but at least it was warm. Really so excited for our next stop- Vietnam! We have 24 hours in Ho Chi Minh before we escape the city. Does anyone have any recommendations ? #travel #travelingwithababy #travelmadmum #adventure #backpacking #instagood #instatravel #picoftheday #instapassport #holiday #jetset #travelgram #wanderlust #familytravel #livingthedream #babywearing #baby #mumblogger #langkawi #malaysia #vietnam @ergobaby

Rather than face being stuck at home with a baby while on her year’s maternity leave, Edwards and Bayes packed their bags and left London for Bayes’ home country of New Zealand when Esme was only 10 weeks old.

“It’s easier to be away and have quality family time together than it is to be home cooking and cleaning and maintaining a household,” Edwards told ABC News

We were VERY productive today!!… We visited this iguana project, we also did a lesson in raw chocolate AND visited Mayan ruins… We even made it back to @chaacreekbelize to watch the sun set from our pool… a good travel day by all accounts despite the toddler throwing several Wobblies …. I’ve decided to fork out for a transfer tomorrow … it’s soooo hot on the buses without AC for little man and we would potentially need to take four ?… ? We are still figuring out the Central America transport system… it’s going to be interesting that’s for sure … anyone that’s navigated it with kids relatively comfortably … hit me up with tips ?✈️?

After a few months in New Zealand, they headed off for seven weeks back-packing through Southeast Asia enjoying each other’s company and the hospitality of the locals.

Esme is now 3 years old and has visited nearly 30 countries in her short life, traveling somewhere new when mom and dad have breaks from work

P A R A D I S E … it’s been so good to stop and catch our breaths this last few days. We’ve been travelling full steam ahead and I didn’t realise it until we came here and relaxed so much. I mean how could you not feel relaxed here??? @portofinobelize ?✈️? hosted

Now Edwards is on maternity leave again with baby Quinn, and they’re off on another adventure

This is one of the cute villages around late Atitlan… Those little tuk tuks rip around the streets, up hills and along dirt tracks. It’s pretty impressive.. The streets are lined with little stalls, all of them have oodles of colourful textiles. Not to mention the cute cafes and many tortilla stalls. Latin America eat your heart out!!.. it was such a pleasure to collaborate with @hoteltoliman whilst we were there. They give SO much back to the community. Like so many things. They have a house for women fleeing domestic violence and they allow kids with physical disabilities to have their weekly therapy in the pool. The lady that owns it is the most intriguing Guatemalan women. She has done so much voluntary work in her life .. I can’t wait to do the write-up.. ?✈️? would you visit Lake Atitlan?

This time, when Quinn was just 9 weeks old, the family headed off to Central and South America via Spain, Canada, and the United States.

Now at 5 months old, Quinn has already been to seven different countries

Our little, or not so little, QUINN, is growing up too quickly .. 16 weeks old already … it’s crazy how I can’t remember what it was like when it was just three of us … anyone else feel like that when they have a kid? Forget what it was like before… ? ? @marissahb_photography

FIVE MONTHS OLD… where has that time gone?!?!… I am loving this stage watching his little chubby hands try to figure out grabbing things and chucking them around .., Giant @Lego is perfect for that… We had a fab couple of days staying @legolandflorida beach resort!!.. Esmé is exhausted from her big day in the park! So nice coming back to chill out here ?✈️? Thanks so much for having us @legolandflorida … tomorrow we are doing a whistle stop tour of Disney before heading to Anna Maria Island … so excited ??? #myminifigure

How do they manage to fund the travel? Edwards is a hospital nurse manager and gets nine months paid maternity leave. Bayes works in construction and has a flexible schedule. The other three months of traveling are funded by the rental of the couple’s London home.

Using all the traveling know-how the 33-year-old has accumulated over the years, they are able to make their money stretch a long way

We are kinda loving this #vanlife ?✈️??#jucyusa hosted

Their travels are beautiful and adventurous, but the best part about their first maternity leave adventure was seeing Esme grow, Edwards says.

“The most enjoyable bit was just having unlimited time for Esmé and seeing her developing without having many distractions,” she said

We were so sad to leave Canada this morning…We finished off at such an awesome spot on Vancouver’s waterfront @westinbayshore … We hardly left the hotel at all because we all needed a rest… Feeling rejuvenated and ready for some USA exploring … as much as it was lovely taking the train along the coast this morning, it was a little bit of a challenge with the two kiddos and all our luggage until we picked up our next rental car… I am surprised at how well we are all doing with long road trips …I also can’t believe Quinn has just hit country number four!!.. @rentslcarscom ?✈️? sponsored..

You definitely need a car to drive around Canada and see all the best spots. Like this lookout from Revelstoke National Park .. 25 kilometres of windy road to the top where grizzly bears hangout .. we had such an awesome time in @seerevelstoke … Our next stop is Kelowna ??? @rentalcarscom (sponsored)

They hope this trip will give them a similar experience with Quinn.

Edwards has inspired other moms to travel

I’ve been waiting for that volcano to pop it’s head out of the clouds the entire time we’ve been here @hoteltoliman .. was feeling chuffed when it was finally visible at our last glimpse of it this evening … and yes this baby is MASSIVE.. he’s only 4.5months old and already wearing 1 year old size… ?✈️? hosted

The family has faced critics for exposing their children to foreign countries, but being a nurse, Edwards knows what she’s doing. Aside from the few naysayers, she gets positive messages.

“Most of the [reaction] is positive and heartwarming, that we’ve inspired them to do something similar,” Edwards told ABC News

So I turned 33 today .. the year where everyone will take the piss out of my accent when they ask how old I am ???… (Dirty Tree) .. Every day is an amazing day since we are travelling at the moment. However doing the Mountain Coaster Pipeline in @revelstoke was a nice little baby-free treat, even if it was only for a few minutes!.. Esmé and @travelmaddad also had a go together.. it was an awesome start to our few days here in Revelstoke.. This week is full on celebrations as Esmé’s birthday is in two days time and then it’s our first wedding anniversary.. @seerevelstoke #therealstoke #quikminute @gopro ?✈️? sponsored

“I had an email from a lady a few months back. She sent me a picture of herself holding her little girl up in the air in Sydney,” she shared with Today.

“It reduced me to tears”

The obligatory PASSPORT photo… with brexit looming I knew it would take some time to get Quinn’s passport. Everyone wants an Irish passport from their ancestors since the future of the British passport is uncertain… I’m just so glad it arrived on time for our trip. I’ve frightened the shit out of the postman most mornings literally standing in the door waiting for him…. Soooo glad we are free again ?✈️?

She said, ‘Thank you for inspiring me. I didn’t think it was possible to travel with a baby. I wanted to come to Australia to see my sister, and all my friends and family thought I was crazy.’ She told me when she saw my blog, she just booked it.

That was so heartwarming,” said Edwards

This week we have made some serious headway with getting ready to leave .. I am not feeling so overwhelmed as I did.. Almost there … ???… Love this pic of little man feeling the wind blowing and watching the trees moving. I disagree with my critics who say travel is wasted on little ones like him… i definitely feel they get a lot from the different surroundings, sites and smells .. what do you think? ? taken by @southbankcollective ( a group of students from LSBU who do freelance work) They took this pic for my university alumni profile .. I find it hilarious that they wanted to feature me ?

“I still can’t believe sometimes that I went through with it, but I am so glad, as we have inspired so many people with our story”

I’ve been quite surprised by the crowds around downtown Banff and Lake Louise. @sunshinevillage was an absolute gem of a find… This area is well known to skiers and snowboarders. However it’s an absolutely fabulous place to get away from the busy parts of Banff in the summer. The hiking is incredible as has very family friendly trails. I am sure it won’t be long before this place becomes high up on tourists lists of places to visit in the Canadian Rocky’s ?✈️?… Tomorrow we leave for Johnston Canyon

So that’s a wrap … We’ve been in the USA for almost a month already … it’s been incredible to say the least.. However we are so excited to go to Belize in Central America tomorrow!… well actually it’s 1230am and we are leaving super early. I’m a little worried about getting the kids up for a 530am flight… Wish me luck… ?✈️? photo by the amazing @marissahb_photography

4 uniquely large flatbreads that will sure to make your mouth...