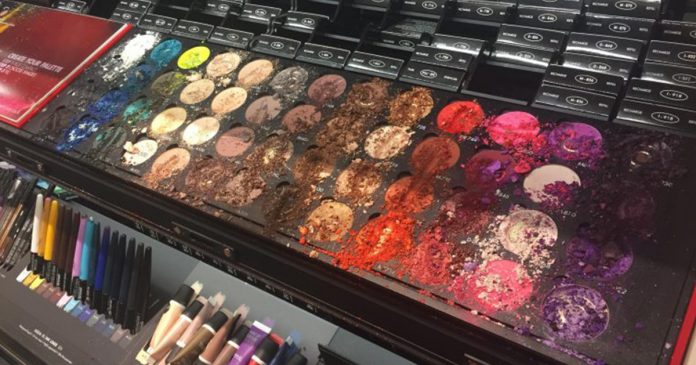 For makeup enthusiasts, lipsticks, eye shadows, blusher, foundations and many more are like a treasure for them. These makeup essentials are usually expensive but to makeup lovers, they are worth the price. Some even willing to cut on other expenses to buy the latest makeups. So, imagine their reactions when they find out that a child has destroyed US$1,300 worth of makeup in one of the biggest cosmetics chains in the world, Sephora.

Brittney Nelson, a makeup artist took the photo which shows 52 ruined Make Up For Ever eye shadow tester palette at a Sephora store in Augusta, Georgia. 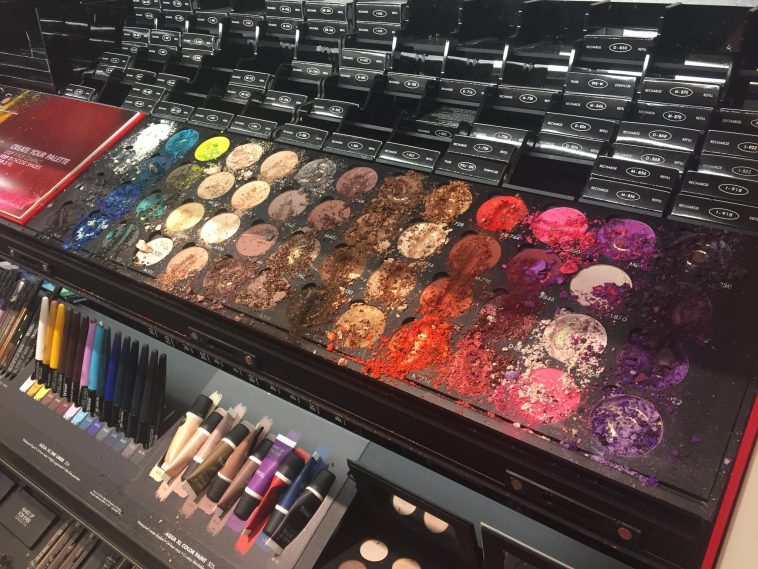 She was furious upon seeing the partially used makeup testers being destroyed by an irresponsible parent who let their child to play with the testers.

Brittney wrote on her Facebook page, “$1300 of Make Up Forever eyeshadow destroyed at Sephora tonight due to a small child. I’m sure he/she thought they were like finger paints and had no idea how naughty they were being. Tons of destroyed product and pissed Sephora cast members are not a happy place to be. Mammas, please shop for your makeup without your tiny humans. It’s not fun for you…or them…or the expensive product. Anna Heath and I about passed out when we saw this atrocity. Being me, I’ve needed to bring Allie into many makeup stores as she’s grown and had a strict ‘hands in pockets’ rule for her and a strict 10-minute rule for me. It was very helpful so if you must take your kiddos makeup shopping I suggest trying it.”

The post quickly went viral and received 5,700 likes and 27,000 shares so far. Many netizens commented on her post blaming the mother for letting the child did that to the makeup.

“This is outrageous! How could the mother be unaware of what her child was doing. If you cannot manage your children then leave them at home!!! What a waste,” said one comment.

Some supported Brittney’s suggestion to not bring young kids to a makeup store and said how dangerous it could be if you are too occupied with the makeup shopping and let the child wanders alone in the store. “I don’t normally go to Sephora but I understand how expensive makeup is and for someone to let their kid run amok and not watch them is ridiculous, they could’ve knocked something over on themselves or hell someone could’ve even kidnapped the kid.”

However, there are also some people defended the unknown mother as they said that child could be handful sometimes and it might have happened when the mother took her eyes off her child just for a second.

After all, the damage is done. This incident serves as a big lesson and a reminder to all parents out there to always supervise your children wherever you are, not just in a makeup store. Everything can happen in a split second. Your child could be kidnapped or destroyed the whole makeup aisle so keep your eyes on them!