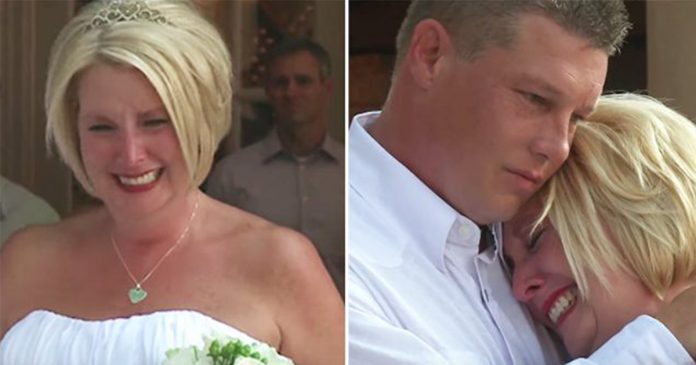 After breaking his leg in 2000, this Texas man was diagnosed with a nerve disorder, and about ten years later, his right leg required amputation. While confined to a wheelchair, he met the love of his life in 2012, and their special bond inspired him to make a miracle happen on their wedding day.

In spite of his disability, Kevin’s insurmountable spirit keeps him smiling. “You can’t let it get to you,” he told FOX 34. After Kevin broke his right leg 17 years ago, an ailment typically cured by rest and temporary immobilization took a turn for the worse.

Over the next 10 years, Kevin made a trip to the hospital at least once per month Despite their best efforts, in the end, Kevin’s doctors amputated his leg in 2009. After the operation, Kevin was confined to a wheelchair.

However, Kevin did not let his medical misfortune tarnish his optimism.

“The way I look at it, it could always be worse”, he said This positive, forward-thinking attitude is what allowed him to keep a smile on his face. Kevin’s optimism is also what caught the attention of the woman he would marry, Kim Didway.

“It was love at first sight,” Kevin says, fondly.

“[He] walked in, he turned and had grin from ear to ear and it was an instant connection,” Kim says, with a gleaming smile Kim has yet to see the surprise Kevin has planned for their wedding day; her fiancé has secretly been working with physical therapists to learn how to walk again for their special day Kim had never seen her fiancé walk on his own. “I’m going to make it the best day of her life,” Kevin proclaimed.

At Caprock Winery in Lubbock, Texas, Kim walks down the aisle, clad in her all-white wedding gown, with a bridal bouquet and a lovely smile.

As she approaches the altar, the priest presiding over the ceremony requests all guests to stand To Kim’s surprise, her fiancé stands up along with everyone else—a sight she’d never seen before “I just saw him walk for the first time ever, and there are … I’m blown away. I about fell over backward, I honestly did,” Kim says after the ceremony, wiping away tears of joy Kevin’s willpower and determination are nothing short of inspiring!

Watch this touching moment and Kim’s tears of joy and surprise: