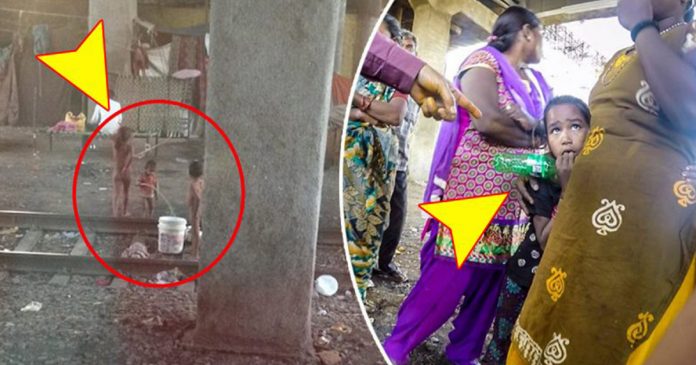 Be it a stroke of good fortune or the work of fate, 8 year-old Divya’s life and that of her family’s took a skyward turn for the better due to a chance encounter with a Australian millionaire businessman.

Richard Harold Smith or better known as “Dick Smith” and his wife Pip were journeying along the Indian landscape via train while they were touring the region. At one point the train had to make a quick pit-stop under an overpass in Vadodara, Gujerat. It was at this time when the Australian businessman peered out of his window and took a photograph of a homeless family who resided under the train bridge. The one characteristic that stood out to him was the girl in the middle, wearing nothing but a pink bracelet around her wrist.

He noted the GPS coordinates as the train picked up speed and left for the next stop in their journey. The 71-year-old philanthropist then contacted a couple in Sydney with a mission to find the Indian girl with a pink bracelet and having only a picture and GPS coordinates to go on. The Sydney couple, Chris and Jess Bray, who are wildlife photographers could not pass up the opportunity and promptly accepted Smith’s proposal. Jess Bray recounts humorously saying “Chris looked at me and said ‘do you want to go to India’? I was like ‘sure’,” she said with a laugh. 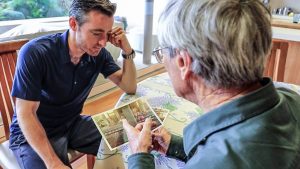 Although the couple had only just returned from their expedition to the Galapagos archipelago and the Amazon, they found themselves flying once again and this time to the vibrant streets of India. They proceeded to Vadodora and there began their search for the girl with the pink bracelet.

Their hotel receptionist, a girl named Jayati was eager to aid the couple on their mission to find the girl and her family and therefore traveled with the couple to where the photo was taken which was at a bridge known as the ‘Polytechnic Bridge’ or the ‘Shastri Bridge’. She also acted as their English/Hindi translator.

Jayati and Chris Bray on the ‘Polytechnic Bridge’ or ‘Shastri Bridge’ 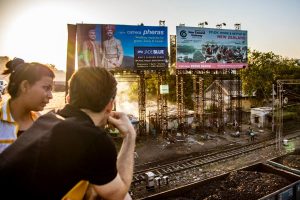 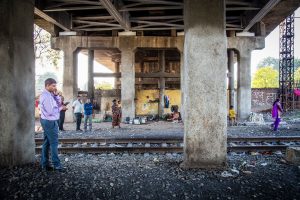 Though they arrived at their destination, Chris and Jess could not recognize anyone from the photo they had been given and as desperation started to creep into them, they called on a contact of theirs, Ratan, who was a manager at a nearby bank. Ratan then introduced the couple to Dr. Chellani who was a lecturer form the nearby university who graciously agreed to help them. With that, back they went to the scene in question which was under the Shastri Bridge.

Dr. Chellani asking residents who were nearby whether they recognized anyone from Smith’s photo. 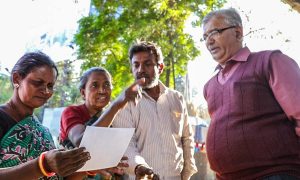 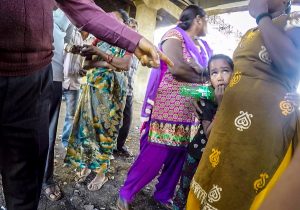 They had found the sought after girl and her family. Divya whose name means ‘divine light’ was 8-years-old. She was shy and cautious towards the newcomers as she thought that she had gotten in trouble for something. The couple told her that Smith had taken a photo of her and her family and that they just came to give her the photo. 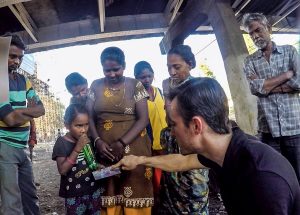 Divya slowly warming up to the strangers and the rest of the family introducing themselves. 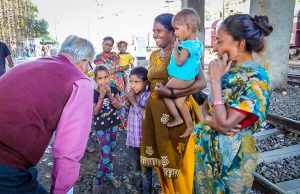 The family had been living this poverty stricken state for nearly 12 years, Divya’s mother had to give birth to her children there under the bridge without any nurse or medical assistance as they could not afford it. Divya’s father worked as a plasterer and earned a measly $4-6 a day which was hardly enough to support the family of 5. The task of turning this family’s fortune around began that afternoon when they were asked to go to the bank where the couple would explain their whole endeavor to them.

Divya’s family in the bank, slowly realizing that their lives were going to change for the better by Smith’s generosity (offering to pay rent for them to move into a proper home, helping Divya get a good education, helping the father earn better wage etc) 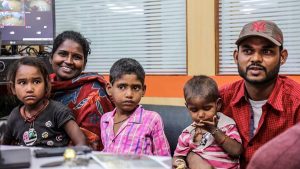 Dr. Chellani had put forth the idea to write a formal contract that linked to the account which stated exactly what the funds were allowed to be used for i.e. rent and the children’s education. The couple put in 3 months worth of rent into the account to start things off. 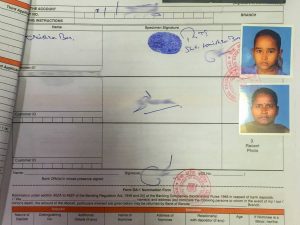 Chris and Jess Bray took the family shopping.
Divya looked ecstatic with the new clothes she’d get to wear 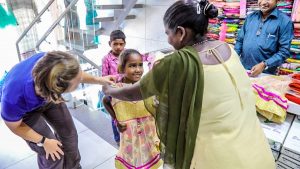 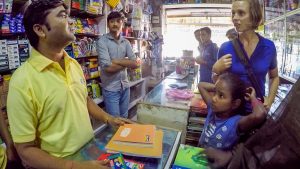 This miraculous journey of finding one girl with a pink bracelet in the swarm of 1.3 billion people which is the population of India is simply astounding. Chris said that “It’s so wonderful that the girl’s family now has a chance of some definite income, and instead of having to remain under the railway bridge to be able to get into some reasonable accommodation,”

It truly was a remarkable feat and thanks to the generosity of Dick and Pip Smith as well as the goodness of Chris and Jess Bray, Divya and her family will see brighter days to come.

Divya holding up a picture of Dick Smith and Pip 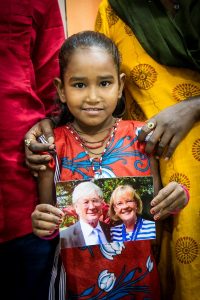