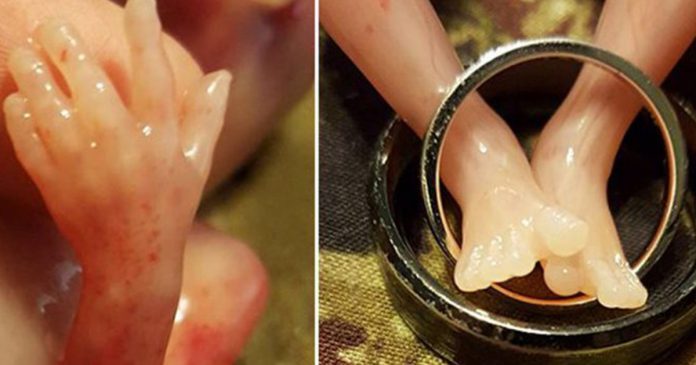 Felicia Cash made the courageous decision to share heart wrenching photos of her 14-week-old child and described her miscarriage in a Facebook post. Felicia, who had always felt strongly about the pro-life argument said in her post that her stillborn child was “very obviously human, not a cluster of cells, not a lump of tissue, not a blob of unformed flesh.”

With this post, she had hoped to shed light on the fact that even at only 14 weeks gestation a baby is already very notably developed and the pictures of her baby boy was tangible proof of how the life of a human being looked like in the earliest stages of life. Felicia’s precious baby boy surprised her at how developed he was at only three-and-a-half months old and that he was ‘just as much of a human being than anyone else’.

Felicia’s baby boy, Japeth Peace Cash, was born on the morning of July 24th at 8:30 at home as she could not make it to the hospital in time before her water broke

“He is perfectly and wonderfully formed, right down to his amazing tiny toes and fingers, even his fingernails are formed and visible. ” Felicia says in her Facebook post

Felicia and her husband had been trying to conceive and had struggled to start a family for 13 years. They made a decision to foster three sisters and later moved to adopt them two years later. Remarkably, Felicia had told Live News that “The morning after we signed their adoption papers in court, we found out that we were expecting. Eight months later, our oldest son was born. A few years after that, we were blessed with another.” Their children came as an absolutely wonderful surprise to them but their good fortune did not last however.

The next time Felicia was expecting, and this time they were twins, she had multiple complications from the early stages of the pregnancy. One of the twins she was carrying died early in the gestation but doctors had high hopes for the remaining twin that he would progress and grow healthy. These reassurances did not last though as one day when Felicia’s husband was at work, she started bleeding and was overcome by severe pain. Before her husband could reach her, her water had already broke and she’d given birth to her tiny baby boy, Japeth Peace.

Hundreds of women had shared her post and offered words of solace condolences to Felicia while other women who had been through miscarriages as well, shared their experiences. She also added a message to those who have suffered similar tragedy saying “To those who have experienced a similar loss, my heart goes out to you,” she concluded. “Your love for your lost ones is not in vain. God is good, even still.”

Felicia says in her Facebook post to women who were considering abortions that “if you are considering abortion, please take time to find the truth and reconsider” and “There are other options. There are people willing to help you,”. She states that though this has been a tragic event she was still thankful to have been able to share her son’s life for as long as he was one with her.