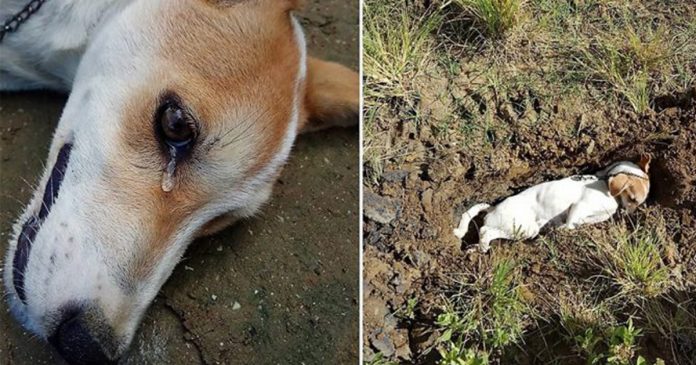 Dogs are by far the greatest relationship one can have in life because not only are they extremely loyal, their love for their owner is unconditional. They were not dubbed ‘man’s best friend’ for nothing. Some dogs will even go as far as to pawn their lives and out themselves in harm’s way just so they can protect their master.

Achy Wijaya lives in Merauke, Indonesia shares the gut-wrenching story of how his dog did just that. He was shocked to wake up one morning to find his beloved pet dog lying on the ground nearly motionless. They believed the dog was poisoned by a thief who attempted to break into Achy’s premises.

Achy had thought that his dog must have gotten agitated by a cat and that was the cause of him barking in the middle of the night. Little did he know that the dog was fending off thieves who were trying to break into Achy’s home in an attempted robery.

Achy and his family awoke the next day only to be confronted with a heartbreaking sight. He recalled “The next day, I woke up and saw my dog ​​lying stiff surrounded by vomit and he was foaming at the mouth.”

Achy added, “We wanted to rush him to the animal clinic but it was a Sunday and the clinic was closed”

Achy said “We tried to nullify the effects of the poison by forcing him to drink milk. We also tried to make him drink oil and coconut water but did not work. ”

Though his dog fought to stay alive, the poison was too strong and it eventually overpowered the canine. Achy and his family buried their brave and loyal pet in their backyard which was the surroundings he had guarded when he was alive.

Brave dog risked his life by taking four bullets to save...