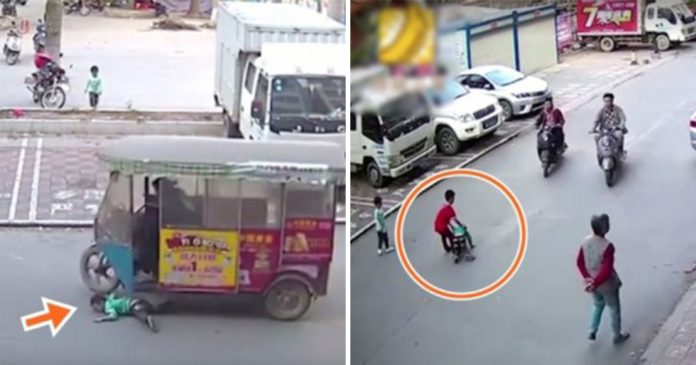 A young child from Guangxi Province in China was knocked down by a motorized tricycle on the street in a horrible hit-and-run accident. The driver quickly fled the scene and ignored him after the accident. What was more disappointing, adults who stood nearby hesitated to provide any aid. Instead, they just waited and looked at the injured boy.

The terrible incident was filmed by CCTV cameras. The CCTV footage started off with a group of children jumping and running happily when suddenly a motorized tricycle drove by and knocked into one of the children.

A child was knocked down by a motorized tricycle 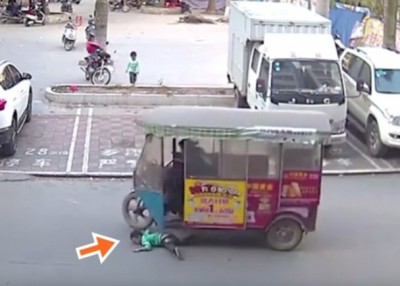 The injured boy tried to stand up but was unable to do so while the irresponsible driver looked around and drove away as if nothing happened. After that, several motorcycles drove passed the accident scene but ignored the injured boy.

Some adults who were in a shop nearby and some bystanders who witnessed the whole incident just stood by and did nothing to help the poor boy. After a few minutes passed, there was still no one came to rescue the boy.

As adults chose to stand aside and watch, a child in a red jacket immediately rushed forward, picked up the injured boy and moved him to safety. He even found some paper towels to wipe the injured boy. Only after witnessing the incident, some adults came over to help. They quickly sent him to the hospital.

The injured boy suffered from a broken leg and loose teeth. He is currently still in a hospital receiving treatment. 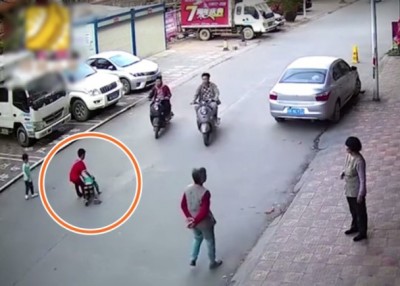 According to reports, the boy who came to help was called Chen Jiu Yi, 7 years old. He said that he decided to help the boy as he witnessed the whole accident and saw the boy’s mouth bled. He was asked if he was afraid when he was giving help to the injured boy, Jiu Yi said, “I am not afraid. My teacher taught me to help others who are in trouble.”

As for the driver of the motorized tricycle who goes by the surname Liu, he made a police report and surrendered himself that very evening. Mr. Liu who left the scene after running over the boy commented that, “I was born with an illness and that illness is sadness and it has been there ever since. I do not have any memory of any events which occur around me. I always feel dizzy and does not know what is happening around me.” The police also stated that Mr. Liu was going to bear the responsibility of the accident and would also pay for the medical costs of the child.

The injured boy with blood coming out of his mouth 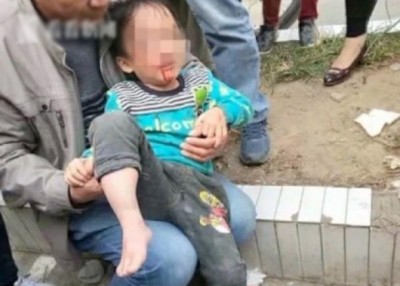 When the incident went viral on the internet, the boy’s noble act has earned him praises from netizens who commented that the boy has better common sense than adults. However, some netizens also made fun of the whole incident by saying that the boy had just risked his life rescuing another person because the boy is still young and does not know what is happening in the society which is full with selfish people.

After the incident was posted on social medias, many netizens criticised the heartless driver and the selfish bystanders.

‘I am disappointed with our selfish society’

Some also commented that:

‘The reason people are reluctant to help is because before they found the culprit, who would want to help others and pay money for the medical cost at the same time?’

‘In my conscience, I wanted to help everyone in need but I did not dare to do that because no one would come to my rescue when I am in trouble!’

Watch the whole CCTV footage of the unfortunate incident here

We are proud of the young boy who rescued the poor victim and sincerely hope that the public will rescue anyone who is in help in whatever situation and whoever they are. You would want for strangers to come to help if the victim is one of your family members, right? So, let us spread the love and help each other in the future.