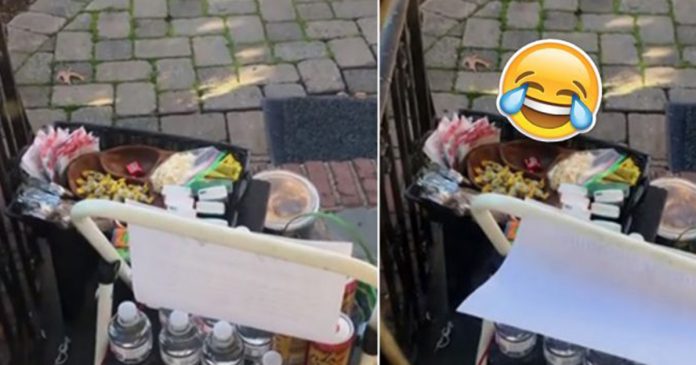 Every year Michele Boudreaux and her family place a basket of treats out for the delivery people who come to their house in Maplewood, New Jersey, during the holiday season. And not once have they had to worry about someone stealing any of the free items, or even someone taking a little extra, until now.

Boudreaux wrote in a post on her blog that on the day she put out the tray of treats, which included hand warmers, chocolate, lip balm, water, tissues, and the like, within a few hours she noticed that all of the chocolate was gone.

“NO JOKE—within a few hours, ALL the Ghirardelli chocolate squares were gone,” she wrote. “I couldn’t believe it. Why would someone do such a thing? And why would they take the most expensive chocolate on the tray?”

Boudreaux was annoyed. It hadn’t even been a day and already someone had stolen all of the good chocolate; she guessed it was around 25 pieces.

In an effort to catch the thief Boudreaux’s husband set up a camera. The family wasn’t going to do anything if they caught the person, they just wanted to know who would steal all the good chocolate and most importantly they wanted to know “Who can eat that much Ghirardelli?”

Unbeknownst to the Boudreauxs it wasn’t a “who” who stole the chocolates, it was a “what” 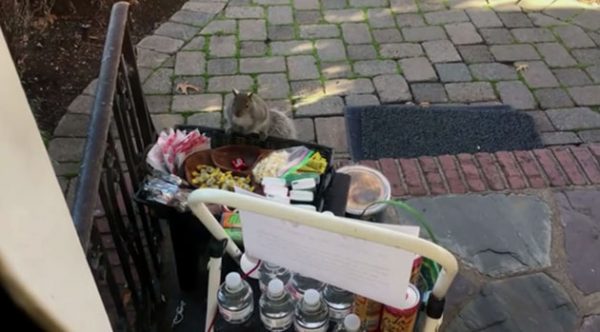 After the camera was installed Boudreaux and her husband went for a walk with the family dog and when they returned they caught the culprit red-handed.

“That’s when we spot the FATTEST squirrel. I mean, this squirrel is so obese—a jolly ol’ chap—he must be prepping for a decade of winters,” she wrote.

The squirrel didn’t discriminate. He took anything and everything his little paws could carry.

It took a moment for the couple to process what they were seeing and they couldn’t believe it. How could a small animal be responsible for stealing so much chocolate?

The following day, while Boudreaux is taking her children to the bus stop, something in their driveway catches her eye. It was an unopened piece of Ghirardelli chocolate.

“This squirrel went from being the biggest jerk ever to becoming the greatest fuzzy freak I’ve ever not quite met,” she wrote.

Tired of the squirrel stealing the treats she put out for the delivery people, Boudreaux placed the chocolates in a jar that required opposable thumbs.

While it worked for a little while—she even put a bowl of nuts and popcorn out for the little guy—the squirrel eventually came back and helped himself to lip balm, gum, and a chocolate-covered treat.

Boudreaux made sure to capture the furry little thief and an accomplice on camera, you can watch all the hilarious videos here.