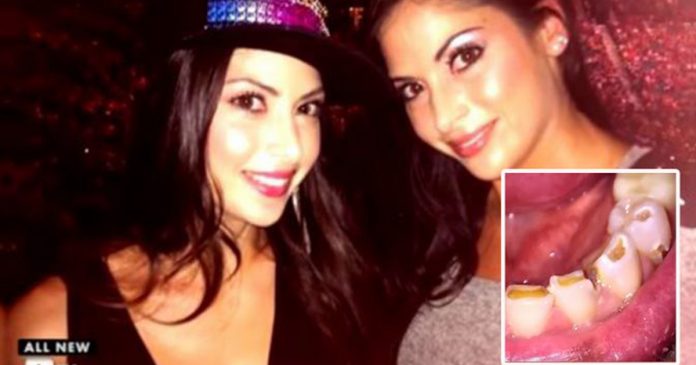 Twins Kimberly and Nicole grew up matching their outfits and switching places with each other for fun—they loved being twins, and were each others’ best friends.

But ten years ago, Nicole went in for a dentist appointment and left completely baffled. Her teeth were full of holes and problems, and she had never had a cavity before in her life. It was strange, but seemingly fixable at the time.

But it only got worse.

Her teeth were decaying away—and soon Nicole would no longer smile in photos with Kimberly.

“Nicole’s smile has vanished,” Kimberly told The Doctors. “It was—it was really awful” 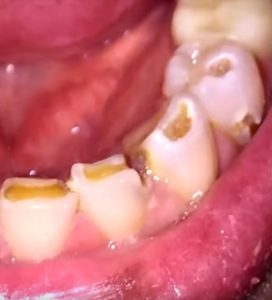 Nicole’s dentist told her that basically all of her teeth needed some work. She had exposed nerves, root canals, chipped teeth, even a completely missing tooth.

But the dentist had no idea what the cause could be.

The dentist wasn’t alone—Nicole sought out additional medical opinions, but dentist after dentist had no idea what was going on. Some guessed a fluoride deficiency, another suggested she had a bad reaction to whitening strips. No one had something definitive to offer, and the nightmare dragged on for about a decade.

“I have seen so many different dentists, and they have no idea what it is,” Nicole said.

Nicole was getting desperate, and Kimberly—who had no trace of the same issue—couldn’t bear to watch her sister lose her smile.

The two of them got onto the show The Doctors, and the curious medical mystery sparked enough interest that they hopped on the case, showing Nicole’s symptoms to doctors until they could find the cause 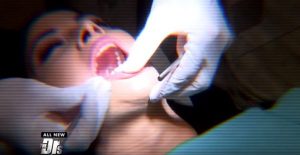 And they found it.

The two revealed that Nicole had Sjogren’s syndrome, which is an immune system disorder where the body cannot produce enough fluids in the mouth and eyes. It wasn’t purely a dental problem; it was a different problem that affected Nicole’s overall health—which happened to severely affect her teeth as well in this case.

Nicole indeed had a hard time producing saliva and tears—which explained why her teeth were decaying.

“Saliva fights off all the bacteria and is the mouth’s own defense mechanism,” Willardson explained. Without this, Nicole’s teeth were far more susceptible to rotting.

Willardson had done a saliva test with both the twins.

Kimberly’s was normal, but the amount of saliva Nicole produced was merely a fraction of her twin’s 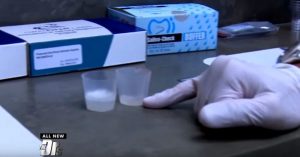 After a decade of suffering, finally having an answer meant Nicole could finally obtain treatment. The show promised to fix her teeth up as well.

“I feel good about it, now I’m hopeful,” Nicole said.

Watch the interview below:

And the moment the doctors reveal to Nicole and Kimberly what the cause really was:

Find out the amazing health benefits of adding cilantro to your...