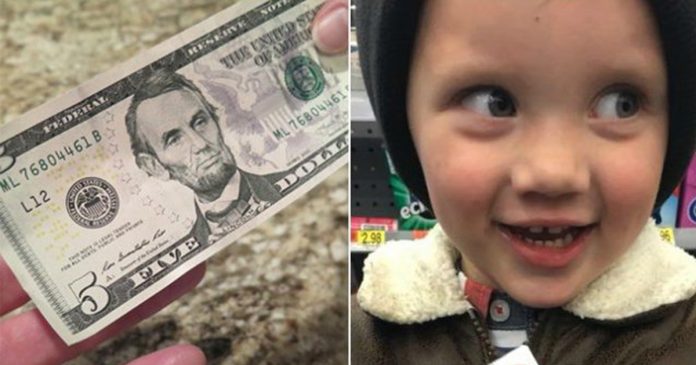 Mother Summer Aldridge knew she had a good kid on her hands—which is why she agreed to buy him a treat during their Christmas shopping one day. When he revealed his request for his treat, though, she was completely floored.

Aldridge took her son Dawson to shop at Walmart one day in Rosenberg, Texas.

Like many moms sometimes do, she promised a reward if the little boy was able to behave himself as they wandered the aisles. She assumed he’d want a small toy, or perhaps a bag of candy; although she knew her son was well-behaved, she didn’t think he was that different from all the other little kids she knew.

At the end of the trip, he’d behaved impeccably—so Aldridge gave Dawson a five-dollar limit and told him to pick something out

Aldridge wasn’t surprised when she saw Dawson walking over to the candy, but she couldn’t hide her confusion when he walked back over to her with five packs of Tic Tac candies in his hands

She tried to search for an explanation, knowing Tic Tacs weren’t Dawson’s preferred candy of choice.

Before she could figure it out for herself, though, the young boy pointed to a group of firefighters standing a short distance away.

The candy, he told her, was for them

Her son wanted to use his own money to get them something.

Aldridge couldn’t help herself; she took a picture of her smiling son with his arms full of Tic Tacs before he went off to give them to the men.

Sharing the story later on Facebook, she explained the warm reception Dawson received from the firefighters.

Each man hugged him and thanked him, asking what he wanted for Christmas himself

It brought an extra-large smile to her face when Aldridge heard the boy tell them that he wanted to be a firefighter; the chance to do that was what he wanted for Christmas.

The men posed for a picture with Dawson, telling him to fill out an application for them now—but in the aftermath, Aldridge explained that the real gift was knowing that she had raised such a kind, loving child.

She wrapped up her post with a quote, explaining why she found what her son did to be so important:

It wasn’t a big gift—but the sentiment behind it showed that Dawson definitely understands the true spirit of giving and Christmas.