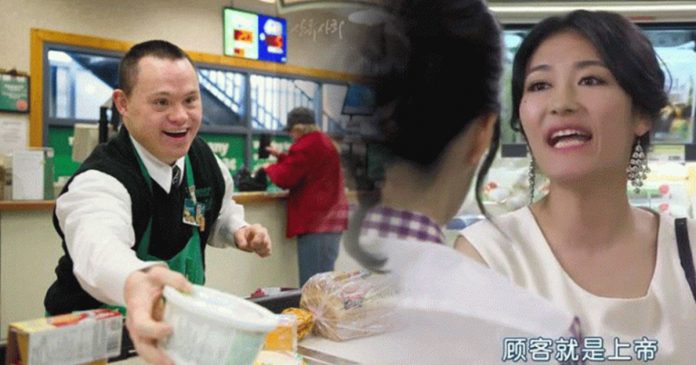 Somewhere in the East Coast in the United States, there was a young man in his early 20s who worked as an employee in a convenience store on campus. The man whose name was Kevin worked as hard as his colleagues and did his job well; he stocked shelves, handled inventory and sometimes, helped the cashiers to bag the groceries. Everything looked normal except that Kevin had Down Syndrome but it did not stop him for being a good worker.

Even though he was quite slow with learning things, Kevin could do a wonderful job and his colleagues were more than happy to work with him.

However, one day, a customer harassed and humiliated Kevin for being slow as she could not wait for the long queue. Kevin felt insecure and mortified when the customer pointed out him for being slow because of his Down Syndrome but later, something happened that helped him restored his faith in humanity.

That day, Kevin worked alongside his colleague, Andrew who was in charge of being the cashier. As it was afternoon which was the busiest time at the store as students came to buy lunch and drinks, Kevin helped Andrew to bag the goods.

Later, a beautiful lady customer entered the convenience store and bought some snacks. She then queued to pay for her goods. There was a customer in front of her and Andrew was scanning the customer’s items while Kevin was helping bagging his goods.

However, she could not help but to notice Kevin who worked quite slow at the bagging area

As she could not hold her patience any longer, the lady yelled at Kevin, “Oh my God! Can’t you be any slower? Hurry up a bit!”

The customer who was in front of her quickly replied, “I’m almost done.”

Unexpectedly, the customer’s response made the lady became more furious.

“You know that you’re not normal and slow so why are you still bother to work here for us normal people?” The lady yelled again

Upon hearing the insult, Kevin tried to put a poker face and ignore the lady’s rude remarks. He quickly put the customer’s items into several plastic bags and tried his best to work faster.

The lady then yelled again, “Can’t you take the groceries to his car? What an awful service! Who is your manager? Get him right now!”

Kevin felt humiliated by the lady’s rude behaviour but he remained composed and respectful. However, Andrew who was observing the rude behaviour could not accept such disrespectful behaviour towards Kevin.

Kevin might be a bit slow but he is still a human and he, too, deserves equal treatment and respect just like everyone else. Having Down Syndrome does not make someone to be less worthy than normal people.

At last, it was the lady’s turn to pay for her food when suddenly Andrew said, “Good afternoon. Sorry, we don’t serve rude people nor accept discriminatory behaviour towards our staffs. You may leave your food behind and leave the store right now.”

Then, Andrew asked the lady to step aside and called the next customers to come forward to pay for their groceries.

The lady who apparently shocked with Andrew’s response, shouted and screamed at him and Kevin and let out another insults to them. At the end, they had to call a guard to escort the rude lady out of the store.

Andrew’s action received applause and praises from other customers who saw the whole incident. They praised him for being professional and standing up to his colleague even when insulted by a customer.

Indeed, one has to have patience and handle any conflicts in a professional manner. A fight must have occurred if the cashier and the employee chose to behave in the same way like the ill-mannered lady customer. So, the next time someone insults you, stand up to yourself and response to them in a mature way.