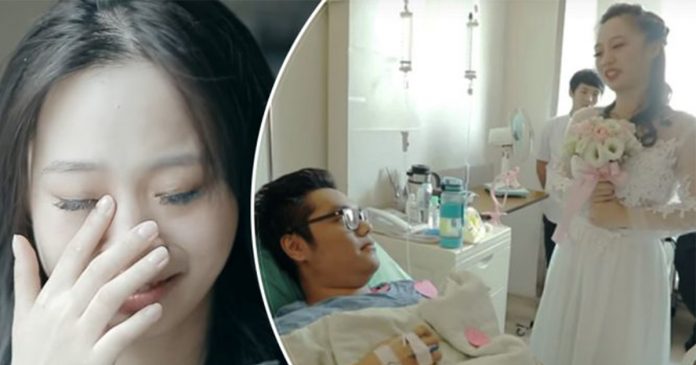 Many people can express love using sweet words and sayings but few can really prove it through action. This Taiwanese girl however has succeeded in proving her love for her boyfriend.

According to Nextshark, a woman from Taipei City, Taiwan decided to take a huge risk by proposing to her boyfriend after he had broke off their relationship. The couple who was supposed to get married in 2018 had cancelled the wedding because the man had suffered serious injuries in a recent car accident.

Scroll down to watch the video below:

The doctors said that the man had to undergo major surgery to amputate the injured parts of his body because they could not save them. He did not want to burden his girlfriend and therefore decided to cut ties with her. He did this so his girlfriend would not have to be tied down and care for him for the rest of their lives.

However, the woman did not agree to his decision but instead she decided to propose to her boyfriend

On one fateful evening, she entered the hospital room wearing a beautiful wedding dress and she held a bouquet of flowers in her hands. She invited close friends and relatives as well.

In the video, she tells her husband-to-be that she was extremely upset when he decided to part ways with her. She continued saying that she knew she wanted to spend the rest of her life with him regardless of his physical condition.

“You’ve cared  for me for the past four years and I’m very grateful for that. It’s my turn to do so now. If you want to take me as a wife, then take these flowers,” the woman said to her boyfriend

This is true love personified!

A heartwarming tale of an old man who worked as a...