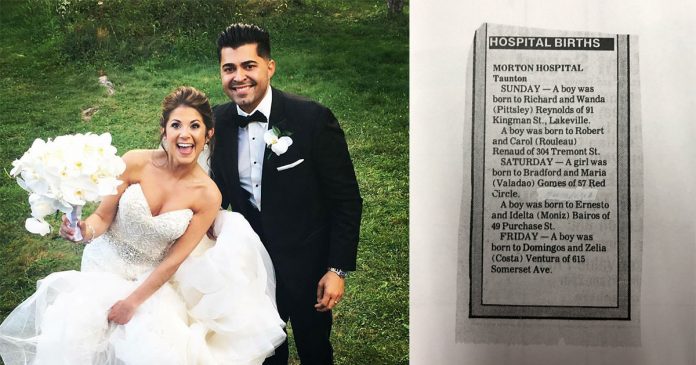 Coincidences are, from a statistical point of view, inevitable and they are bound to happen. With that being said, some coincidences are extremely rare, such as the case of this couple who were born in the same hospital on the same day only to find each other and get married 27 years later.

Jessica Gomes and Aaron Bairos had met over a decade ago, back in 2007, as high school students in Taunton, Massachusetts. It was love at first sight for the couple and with a little encouragement from their friends, they soon started dating.

In an interview with PEOPLE Jessica Gomes said “I knew from the very beginning that he was different—he was respectful, and he made me laugh. He still makes me laugh! No one else can do that. From the start, we both knew we were right for each other.”

A baby picture of Aaron Bairos

A baby picture of Jessica Gomes

After getting to know each other, the couple who found out they shared the same birthday  realized they had much more in common than they thought.

Gomes had said “Very early on, we found out we have the same birthday, probably when we were talking on AIM back in the day.” She continued by saying “Then we connected the dots that we were in the same hospital.”

Gomes’ grandmother had kept a newspaper clipping showing the day she was born at the Morton Hospital in Taunton, Massachusetts on April 28, 1990. It was incredible when they looked at the clipping to find that they were the only two babies born in that hospital on that particular day. Gomes told their parents, saying “We told our parents and they even remembered having said hi to each other at the hospital,”

The newspaper clipping which was saved by Gomes’ grandmother

It was only when they took a driving class together that they worked out they had the same birth date. Gomes states “I didn’t believe him at first when he told me he had the same birthday, it was crazy, I thought he was trying to pull a smooth one and win me over.” They showed each other proof by looking at one another’s birth certificates and true enough, they were born on the same day in the same hospital.

Gomes adds laughingly, “every birthday is a big running joke in the family and we always celebrate every year with them and our group of friends”

When the couple had been dating for some time Bairos decided to cement their relationship and propose to his girlfriend on November 2015. They were walking through Boston Public Garden where Bairos had asked friends and family to stay out of sight in the park’s vicinity. Gomes did not expect him to pop the question or that he had brought together family and friends to witness the proposal but nevertheless she said “Yes.”

The couple were married at Holy Family Church in East Taunton on September 9 this year. Jessica is the fifth generation in her family to be married there.

Gomes and Bairos on their wedding day

Gomes says “our parents thought it was hilarious,” adding “and they knew it was something special”

Gomes says “We’re still getting ready for the married life, but it’s been awesome so far.”

She continues by saying “But we hope our story can bring a smile to people’s faces, because that’s what the world needs right now.”

Was it coincidence or fate?

At the end of the day it doesn’t matter, as long as the couple found each other and remain happy together during the years to come