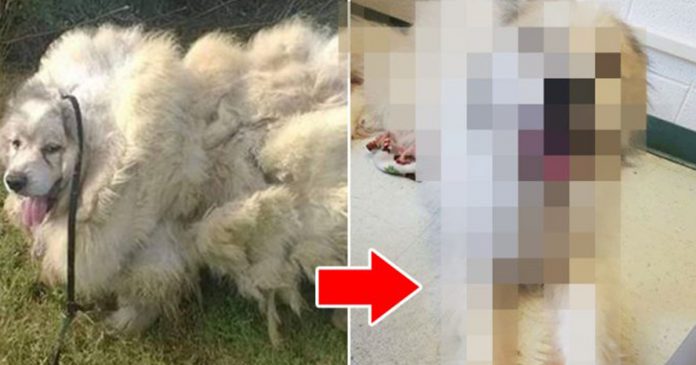 A couple of groomers were asked to help a dog that was in need of a major haircut. When they arrived at the home, they were surprised by the animal’s condition living in a “poop-filled barn stall” for years. They freed him and gave him a much-needed makeover—he looked unrecognizable!

In September 2016, groomers Candice Skelton and Jessica Kincheloe were asked to help a Great Pyrenees dog that had been neglected by his terminally ill owner. When they reached the home, they saw feces and dirt blocking the door of the barn stall where the dog was living.

There was so much filth in front of the door, they needed to shovel it away before it could be opened. Once they walked inside and saw the dog, they were shocked.

“From the looks of the dog and the door it looked like it had been a while,” Skelton told The Dodo

The dog, named Lazarus, was believed to be 6–7 years old.

The groomers asked the owner if they could take Lazarus away, before grooming him, which the owner agreed to

Kincheloe said that during the grooming, Lazarus wasn’t feeling relaxed, but once the fur was gone from his neck, “he calmed down” and soon realized “it was making him feel better.”

How much fur did they cut off Lazarus? A total of 35 pounds (approx. 16 kg) was shaved off! Lazarus looked completely different once the matted fur was gone.

Kincheloe added that Lazarus wasn’t quite used to human touch

“He was OK with the human touch but didn’t seem familiar to it. He warmed up to us really quick, especially after offering treats,” Kincheloe said.

After the groomers finished, they knew Lazarus needed a new home. They reached out and soon found a foster home with lots of space for Lazarus to run around.

He stayed there before being taken in by Big Fluffy Dog Rescue, an animal rescue organization in Nashville, Tennessee

Amanda Brooke Charsha-Lindsey, who works for the organization, took Lazarus in and has been looking after him ever since.

“It took seven people to get this dog here and get him out of that situation,” Charsha-Lindsey said in a video posted on Facebook.

Jean Harrison, founder of the rescue organization, said that after the rescue, Lazarus was trying to get used to his new life

After the rescue, Lazarus’s sweet and loving personality also started to show.

“It appears some personality has emerged,” Charsha-Lindsey wrote in an update on her Facebook page. “And stubbornness has reared itself.”

After years of being neglected, Lazarus is finally in good hands.

Canadian man rescued fish that got stuck in plastic garbage for...