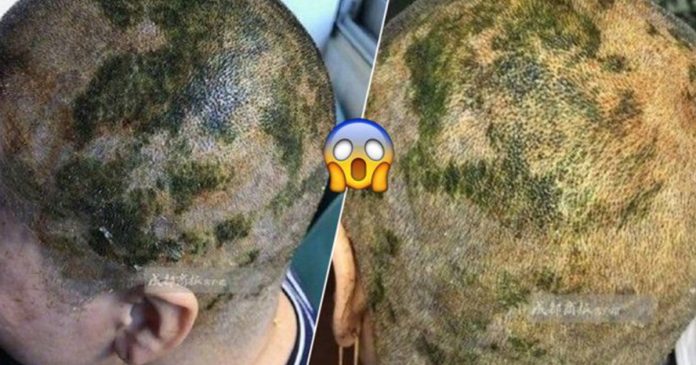 These recent years see several bold hair colour trends like platinum blonde, violet, red and even rainbow gain rising popularity among young women on social media. Most people know that dyeing hair needs professional help, especially if you have dark hair and want to dye it to a lighter tone.

Getting a professional help to dye your hair will avoid any accidents or unwanted hair dye mishaps to happen.

Unfortunately, for this young lady from Sichuan, China, she had to go through the worst time in her life even after she got a help from professionals at a hair salon to dye her hair 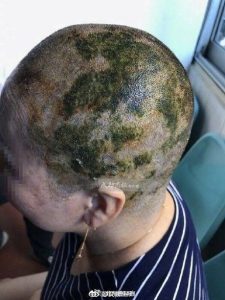 Initially, Deng who had long hair was told by the professional colourist that she had to bleach her hair first before dyeing it. This was to ensure that the new hair dye would turn out in the right tone as it should.

The dyeing process was then repeated for the third time and Deng still complained about the burning pain she felt on her scalp. She told the colourist that the hair dye product might not be suitable for her scalp. However, the colourist quickly disapproved her thought and told her that it was ‘impossible’ and continued to dye her hair.

However, her hair did not turn out as she expected.

Her hair colour had changed into green apple instead of ash green! 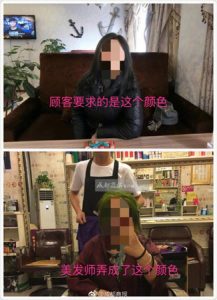 Deng who was in agony quickly called her daughter to pick her up from the hair salon. It was at that time that the colourist realised there was something wrong with Deng’s hair. She then washed the hair dye off Deng’s hair but then it was too late.

Deng had to be sent to the hospital immediately. The dermatologist at the hospital confirmed that she had anaphylactic shock, an extreme, life-threatening allergic reaction to the strong chemical in the hair dye.

40 percent of her scalp had suffered from chemical burn 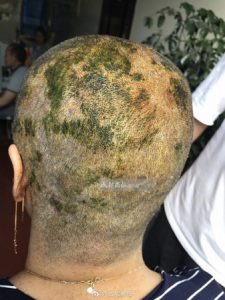 Due to the severity of the burn, the dermatologist advised Deng to shaved her hair off as he was afraid that the remaining hair dye would cause worse effects to her burned scalp.

Deng had to be hospitalised for five days following her injury. When asked about the incident, Deng sadly told: “I have always had long hair. I cannot accept the fact that I have to shave my hair off.”

Following the unfortunate incident, Deng proceeded to sue the hair salon for emotional distress, medical expenses, cost of a wig, and other related expenses which amounted to a total of USD 9970.

However, the hair salon refused to pay for the compensations as such incident had never occurred in their 10 years of being in business. They only agreed to pay her USD 432.

Deng is now considering to take legal actions against the irresponsible hair salon.

She hopes that her story will serve as a life lesson to other people. She urges to go to a professionally trained colourist and use approved hair dye products. Do not be tempted to try cheap hair products or else, you might risk getting into the same situation like Deng!

Mother shares her terrifying experience after baby son gets infected with...