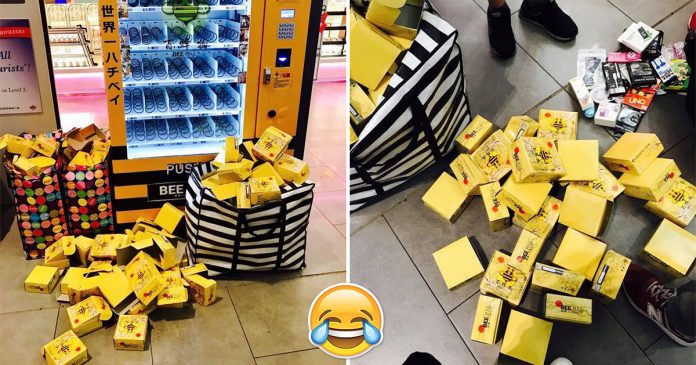 For some who would consider themselves lucky, they may be interested in trying out for mystery prizes. The anticipation and curiosity that awaits the winner is quite thrilling especially when you have put a lot on the table. Though it may be fun to try your luck with a few prizes, some may take it a little bit too far.

This is what happened to Mitchell Law, a 31-year-old graphic designer based in Cambodia.

A company called Bee Bae have set up a mystery gift vending machine in Kuala Lumpur International Airport 2 (KLIA 2), Malaysia. Basically, how it works is that users need to insert RM10 (USD 2.5) into the machine. He/she will then select a box of their choice. Inside the box, they would find a card stating a prize that they have won. They then have to contact the number stated on the box to collect the prize or have them delivered.

The prizes consist of a wide variety ranging from small prizes such as USB charging cables to better ones such as the Sony PlayStation 4. Other big prizes also include the flagship smartphones by Apple, Samsung and Oppo, gaming consoles and electrical appliances. The company also update their Facebook page regularly with photographs of big prize winners.

Bee Bae currently has nine vending machines in the Klang Valley and Penang since it began operations in October last year according to managing director, Aki Lim

Seeing the variety of prizes, Law thought it would be fun to try his luck. But it doesn’t seem to be on his side when he spent a total of RM1,300 (USD330) on the machine. “Every box had a prize. I got a lot of other small prizes like plastic brick toys, playing cards, phone rings and selfie sticks which I’ve given to my friends,” said Law.

His hope to win the latest gadgets and other big prizes was crushed when he found out that the biggest prize he won were two lunch boxes and a hair dryer. He first opened up 40 boxes and got the hair dryer as his biggest win. His second attempt added in another 90 boxes which include the two lunch boxes. In total, Law bought a staggering 130 boxes in total!

Law told the Star in an interview that he would definitely try again sometime and would also conduct a Facebook live session when he opens the boxes.

He later posted his unlucky experience on Facebook. The post has since gone viral with more than 12,000 shares and more than 5,000 comments.

“I’m not even angry or mad because I’m just trying it for fun. I don’t think my luck is that bad but I just find it really funny,” Mitchell said

According to Lim, the vending machine is only meant as a form of entertainment and not gambling. The concept of mystery box vending machines is a hit in Japan and Taiwan and is currently gaining popularity in Malaysia.

However, based on statistics, the drop rate for a good prize is only 5%.

Would you be interested in trying your luck? Why not share this article to find out if there is someone willing to give it a try.